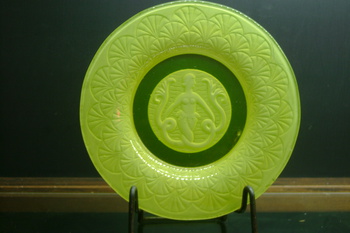 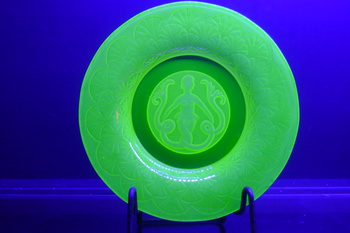 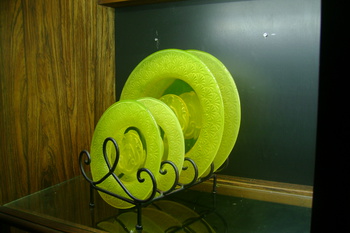 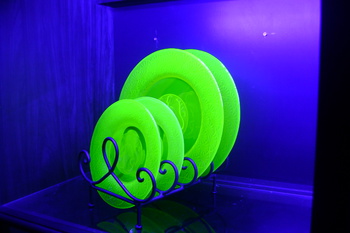 I recently acquired two sizes of these plate's I will update photo's when I figure out how I will display them. These are magnificent examples of a Honey Amber Colored Vaseline Plates. Theses plates just arrived from the glass district of Sweden and the small town of Nybro, where these Mermaid plates were made. The Pukeberg factory is now a days a centre for experimental glass creation and glass education. It contains a museum collection where the Mermaid plates and goblets are exposed, together with the “Lion” collection, by the same designer and period, the 1920’s. The goblets are just as lovely. However, I have never seen any of these goblets in real life in the open market, in any antiques shop or flea market in Sweden. The designer’s name was Jules Venon According to the Museum Display. Very High content of Uranium and glow very brightly under UV Light. Magnificent details were made in the mermaid in the medallion. . The Plate has a Solfjäder border meaning Fan and was designed by Harald Notini. The pattern name we now commonly call Turkey Tracks. So The designers shared their work or this may be a design purchased by Jules Venon when in 1925 Reijmyre glass works went out of business and Jules purchased glass designs and acquired US Patents on some of the designs and persuaded Pukeberg Glass works to Hire glass blowers from Reijmyre to produce an American line of glass which he imported thru New York. I have even located a US patent owned by Jules Venon for a Royale fan pattern goblet. I have located US patents on the mermaid design by Jules Venon. There is probably going to be a mystery who really designed what. But at the display in the Pukeberg Museum in Sweden they credit's Jules Venon as the designer of the mermaid pattern. This information maybe a repeat for the old timers on the list here. But some parts are re-quoted and may contain errors but this all the information I have until I've been corrected or discover more information in the future.