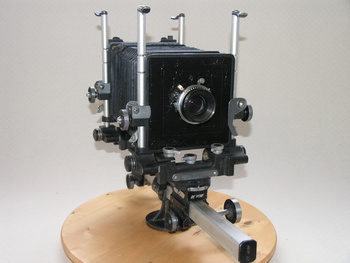 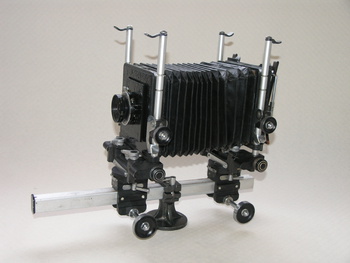 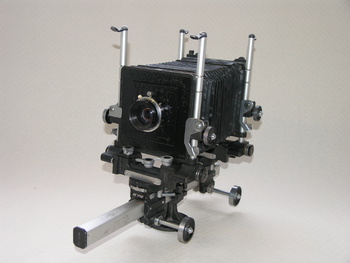 De Vere Ltd. | Monorail Camera | 1948-52 | 5x4.
Another in the "Not antique but quite interesting" category. This British Camera Maker, founded as De Vere (Kensington) Ltd., at Kensington High Street, London, in the late 1940s, later expanded to other addresses, including a factory at Beckenham in Kent, and adopted the name De Vere Ltd. They were manufacturing solely for the professional customer until c. 1952 when they began to produce enlargers and monorail cameras aimed at the amateur market. Their 1952 to mid-60s monorail cameras were made with a hexagonal rail, but this one, Serial No. 51191, has a square rail and is therefore presumed to be an early model, intended as a professional instrument. It is believed that De Vere's 60s models were not highly successful, because, although still advertising its own products in the 1960s, the company was retailing competitive equipment by Arca, Cambo, MPP and others, while continuing to produce industrial and professional apparatus. Their last model, the "Devon" camera, was made from 1972 to 1977 at a new factory in (you guessed it), Devon, but camera production ceased when DeVere merged with Cambo in 1976-7, and the DeVere branch concentrated on enlargers. So, although this may not be an antique, there won't be any more.