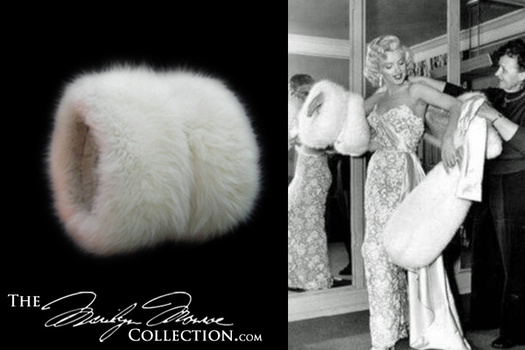 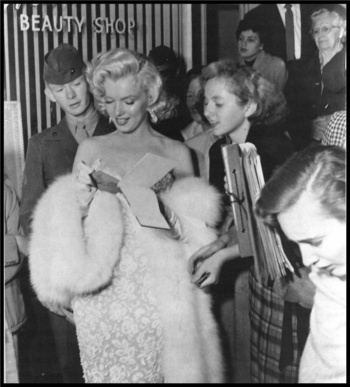 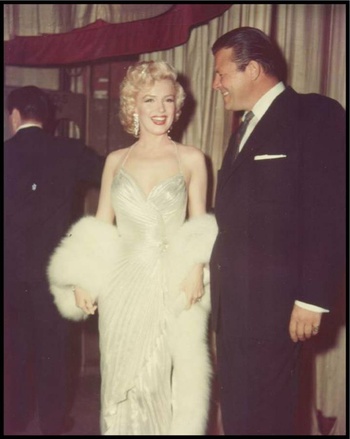 A fantastic white fox fur muff with white satin lining, worn by Marilyn Monroe to the world premieres of "How To Marry A Millionaire," "Some Like It Hot," and other various events. When it came to the premiere, the grand party or the big event, Marilyn had a sure sense of her own image, and dressed as she believed a film star should. This meant long white kid gloves, waterfall earrings of rhinestone and pearls, and the ultimate allure of white or black fur. Furs were for evening and for being a star.

The world premiere of "How To Marry A Millionaire," November 14, 1953. From "Marilyn Monroe" by Maurice Zolotow:

"I want to be all platinum and white tonight," Marilyn explained, as anxious as a girl getting ready for her first prom... Gladys (Rasmussen) gave Marilyn a straight permanent. Then she bleached and tinted her hair and set it. Marilyn was wearing it long that night, shoulder length. Gladys painted her fingernails and toenails with platinum polish.

Her slippers, her evening dress, her long white gloves arrived from wardrobe, together with two wardrobe women. A messenger boy delivered a box with diamond earrings. Her furs had come that morning. The furs were her own. The first furs she had ever owned. Except for the white fox fur stole and muff, and her panties, everything she wore belonged to the studio. The hair, the nails, a good deal of the face were also the studio's. They were hers and they were not hers, just as the woman on the screen was she and not she.

Unchastened by Joan Crawford's pronouncements, Marilyn had chosen a dress made of white lace lined with flesh-colored crepe de Chine and embroidered with thousands of sequins. It had a high waist, and it curved under her breasts revealingly. A long white velvet train trailed from a gold belt. The long gloves were drawn up the length of her arms. The stole was placed around her shoulders. She put her right hand into the muff and with her left she carried the train as she walked outside to a waiting studio limousine.