Flashback: A One of a Kind Goblet Collection

This article talks about the process and the benefits of one-of-a-kind collecting – collecting individual items that work together rather than looking for a full set in the same pattern. It originally appeared in the May 1940 issue of American Collector magazine, a publication which ran from 1933-1948 and served antique collectors and dealers.

There is twelve times as much fun in one-of-a-kind collecting, according to the devotees of the mixed dozen! Goblets, tumblers, sauce dishes – so many things can be collected in the one-of-a-kind manner, and a table set in mixed patterns has charm that lasts far past the dinner hour. 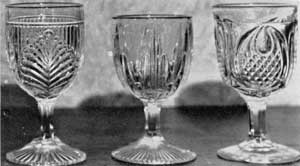 The goblets pictured are from the collection of Mrs. John L. Scales of Shreveport, Louisiana. She is a most enthusiastic one-of-a-kind collector, for she insists that this is the only possible way in which the collector on a budget can have the pleasure of owning one of every pattern that appeals.

It is often possible to find one good goblet without going far from home, but trying to find a dozen of one pattern means a search over many states and a visit to many dealers. Often a particularly interesting pattern loses its interest if it is multiplied a number of times, but there is little chance of tiring of singles. And if one sauce dish does lose its charm, it is always easy to trade singles.

Mrs. Scales considers these twelve goblets among the best for a mixed set – and she has tried out most of the well-known patterns in making this selection: Horn of Plenty, Inverted Fern, Ribbed Palm, Icicle, New England Pineapple, Grape, Diamond cut with Leaf, Paneled Daisy, Prism, Strawberry and Currant, and Honeycomb are very much the same shape and there is little variation in the height of these goblets. The texture is about the same, and there is not much difference in color.

Six American Pattern Glass Goblets: From left to right the patterns are: Grape, collectible only in goblets; Diamond cut with Leaf; Paneled Daisy; Prism; Strawberry and Currant; and Honeycomb.

You will notice that there is one goblet in the collection that closely resembles Argus, but is not. It is a very lovely pattern, and the fact that it is unidentified, as far as name and inclusion in Ruth Webb Lee’s Handbook are concerned, does not bar it from being the twelfth of a very carefully selected dozen.

In the months that this collection has been growing, other goblets have been bought and later eliminated. A Lion goblet and a Classic seemed a bit out of place; some of the other patterns differed too much in color and texture. A Stedman was discarded as too close to the Icicle, in a mixed dozen. These are all beautifully clear, without too much variation in base and stem. And since these were chosen for use and not just for collecting pride, a large part of their beauty as a dozen is in their well-matched shapes.

Tumblers in one-of-a-kind offer many opportunities for mixing colors, or for combinations of color and clear. A table set with amethyst, cranberry, vaseline, amber, green, and blue, with clear between, is particularly lovely.

Sauce dishes collected in singles give the not-too-flush enthusiast a chance to learn her patterns before making a decision as to her big and lasting choice, for the odd sauce dishes are as a rule easier to find and not as expensive as the goblets or larger dishes.