A Quiet Voice in the Noisy World of Rock 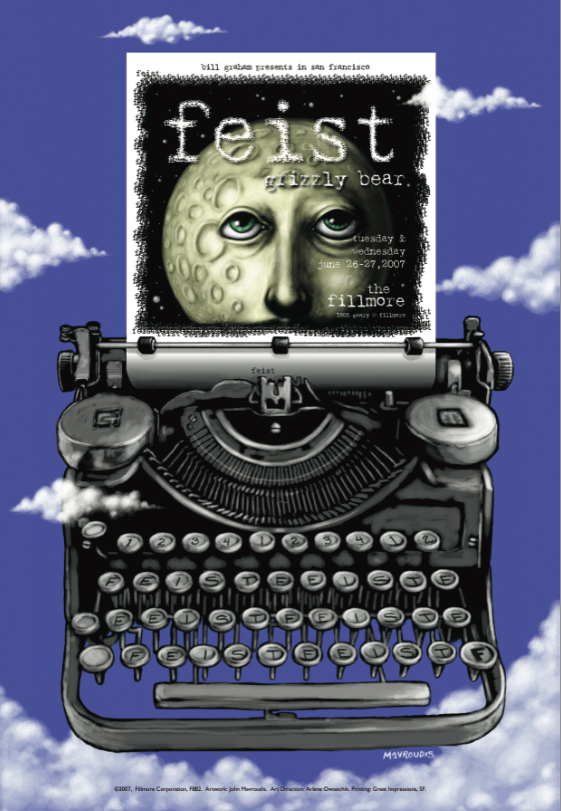 Over the past decade, a self-effacing artist named John Mavroudis has quietly become a player in the noisy world of rock posters. Mavroudis was officially made a member of the scene in 2004, when he was given his first assignment to create a Yeah Yeah Yeahs poster for San Francisco’s fabled Fillmore Auditorium. That important rite of passage was followed in 2011 by his first commission from a Bay Area band called Moonalice, which has produced an original poster for each of its 500-plus shows since 2007 (in a unique arrangement, the posters are given away for free to fans in attendance, then sold later by the band and the artists, who share the copyright).

This weekend, on Saturday August 18, 2012, Mavroudis joins 20 or so other poster artists from around the United States for an exhibition called Rock Art by the Bay, which is being held at The Cannery in San Francisco and is presented by The Rock Poster Society (or TRPS, as it’s known). On hand will be local contemporaries such as Chuck Sperry, Chris Shaw, Alexandra Fischer, Marq Spusta, and Ryan Kerrigan; icons from the 1960s and ’70s such as Stanley Mouse, David Singer, Lee Conklin, and Randy Tuten; and a handful a guest artists visiting from around the country, including Gary Houston from Oregon and Jeral Tidwell from Kentucky. 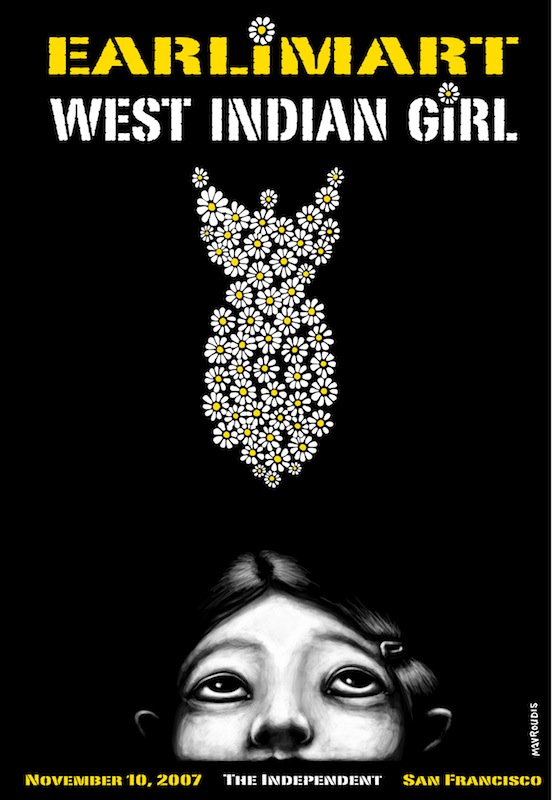 Above: A 2007 screenprint for a show by Earlimart and West Indian Girl at the Independent in San Francisco. Top: Feist at the Fillmore, 2007.

That Mavroudis finds himself in such company is something he’s still getting used to. “When I first started attending the TRPS shows,” he recalls, “I was surrounded by all these legends. At first, I was too embarrassed to walk up and talk to them. I just figured I wasn’t in their league. But recently, over the last year, I’ve gotten to know some people a bit. Not really well, but I’ve had a chance to sit down and talk with Wes Wilson, with Stanley Mouse. They’ve all been really, really kind, imparting some interesting wisdom, and I get to hear some good stories, too.”

Born just south of San Francisco, Mavroudis grew up in San Jose, California, and spent many of his free hours getting lost in comic books. “I still recall the first comics I ever saw; it must have been in the second or third grade. We were walking to school behind a 7-Eleven when we noticed a bunch of comic books that had been tossed. We grabbed ’em, and I collected from then on.”

A self-described “Marvel kid,” Mavroudis was more than just an avid reader. “We used to take our comics and either trace them or put carbon paper underneath the pages. Some of those comics would probably be pretty valuable right now.” 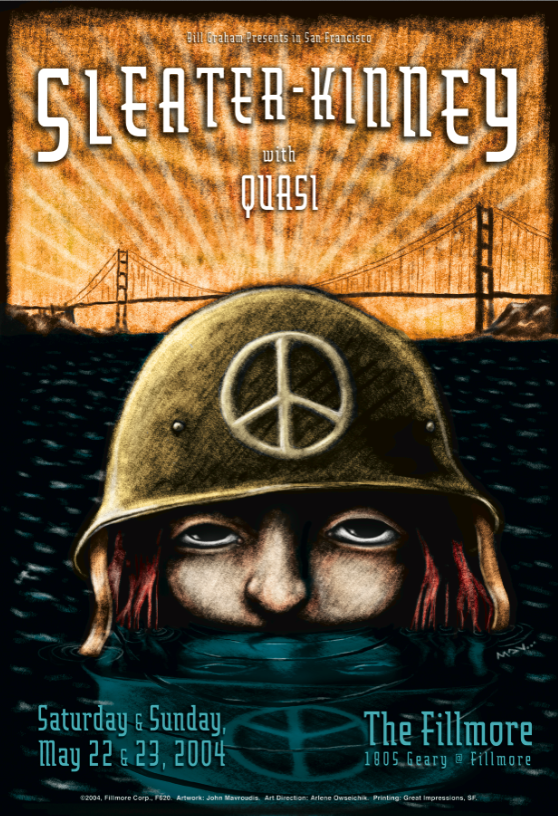 Sleater-Kinney at the Fillmore, 2004.

That’s one source of his current work. Family is another. “My uncle was an artist when I was growing up. I bothered him a lot, asking him to draw, and he taught me a few things here and there. He and my dad were also role models in terms of their sense of humor. We used to watch ‘Monty Python’ a lot, so that was another influence.”

Music was the other constant. In particular, Mavroudis was a fan of early Genesis when Peter Gabriel in the band. “When Gabriel released his third album, that opened up a whole new world for me,” he says. That album featured members of the band XTC, Kate Bush, and Paul Weller from The Jam, whom Mavroudis saw at Tower Records in Hollywood when he was living in Los Angeles. “I gave them some artwork,” he remembers, “which I look back on now as pretty bad. I was a fan.” 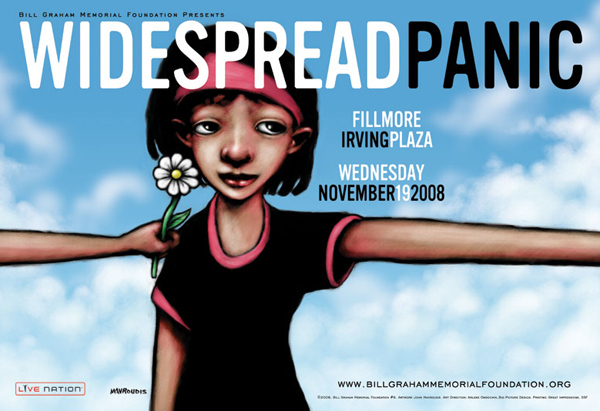 This was also the period when Mavroudis was “mocked by Bono,” as his website bio puts it. “It was 1982. J. Geils Band was really huge, so they were headlining the Sports Arena in Los Angeles. U2 was opening for them. I didn’t really care about J. Geils; I went to the show to see U2. After they played, a couple of friends and I waited around where they sell T-shirts and stuff while J. Geils was on stage. We recognized U2’s manager, Paul McGuinness, who talked to us for a little bit. Finally he said, ‘You want to meet the guys?’ and of course, we all said, ‘Yeah, sure.’ And then they all came out. So now I’m talking to Bono, and I told him, ‘I paid $40 to see you guys.’ And he looks over at his band mates and says, ‘Hey, this idiot paid $40 to see us!’ He apologized right away. He said he didn’t mean anything by it. He just thought it was funny that anybody would pay that much money to see U2. I still have their signatures on a record.”

A job in the mid-1980s at a small startup called Living Videotext lured him back to the Bay Area. “It was one of the first companies that shipped Apple software,” Mavroudis says. “I went there because I wanted to learn to draw on a computer, which was new at the time; Apple had programs like MacDraw and MacPaint. At first, I worked in the shipping department, then I started doing collateral for them, design work for their manuals, things like that.” 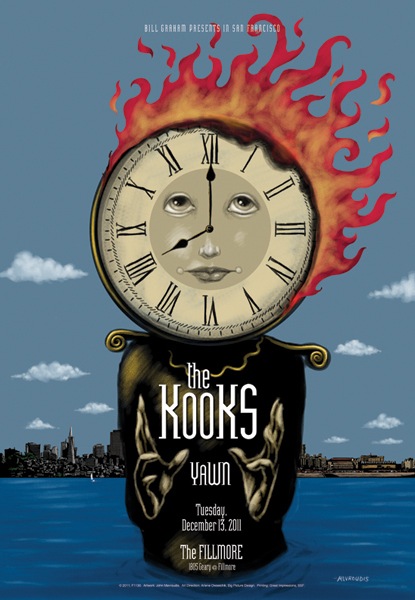 Rock posters were still a ways off. “At the time, I wanted to be a political cartoonist. I was a still big music fan, but I hadn’t really put two and two together.”

A string of regional newspaper jobs followed, and slowly the connection between his interest in art and music began to gel. “I started putting out flyers and posters for bands. I’d show up at shows in small places like Bottom of the Hill [in San Francisco] and just bring stuff, stuff that now I would be kind of embarrassed by. It was a good learning experience, though.”

For a bit, Mavroudis also worked as a DJ at a small alternative college station called KFJC (“The Wave of the West”). “I did the Sunday night-Monday morning overnight show,” he says, a trace of residual weariness creeping into his voice. “That led to more chances to do poster work, flyers, and things like that for bands. I remember doing stuff for Soul Asylum and Sonic Youth when they came through town. It gave me a greater connection to the music. I actually ended up doing a six-hour special about XTC, one of my favorite bands of all time, and got to interview them live.” 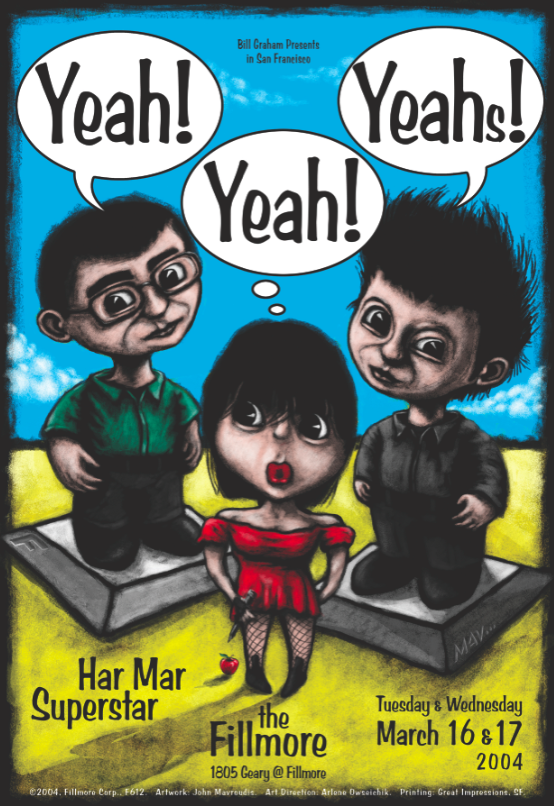 Finally, a pair of friends who made posters for the Fillmore, Isabel Samaras and Marcos Sorensen, suggested he get in contact with Arlene Owseichik, who was the creative director for Bill Graham Presents. That led to the poster for the Yeah Yeah Yeahs in 2004. “Since then, I’ve done about three or four posters a year for the Fillmore. Not a whole lot, but just enough to hang in there.”

Somewhere along the line, Mavroudis got a full-time job with the California Film Institute, where he’s an art director. And in his off hours, he managed to find the time to submit cover ideas to “The New Yorker” (he’s had a few of his pitches purchased by the illustrious magazine, but so far, no cover bears his signature).

Most recently, Mavroudis joined the roster of first-, second-, and third-generation rock-poster artists creating images for Moonalice. “I’d been going to TRPS shows for a little bit,” Mavroudis says, “and I kept seeing Alex Fischer and Chris Shaw there representing Moonalice. Naturally, I bugged them a few times about doing a poster. Finally I got an e-mail, and that was that.” 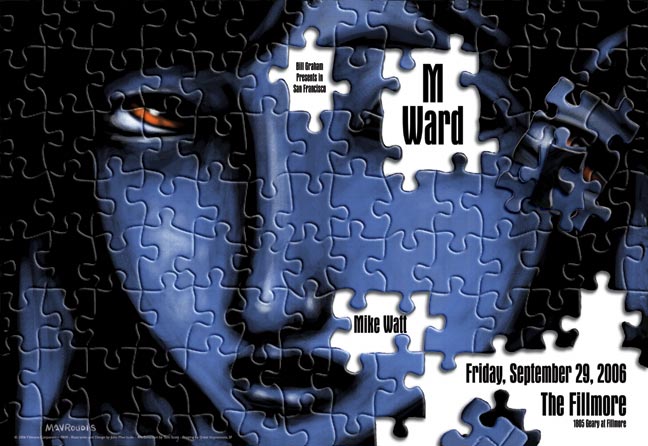 Mavroudis says his acceptance by the Moonalice tribe has been easy. “There’s such a wonderful feeling about working with them,” he says of Chris, Alex, and the band’s ringmaster, Roger McNamee, who, coincidentally, is partners in a venture-capital fund with the same Bono who jokingly mocked Mavroudis all those years ago. “I’ve never felt like ‘the new guy’ or that there’s some kind of barrier between us. There’s such a nice camaraderie, it’s almost a tangible thing. It just makes you happy to work with people like that, and they seem to like the posters.”

“When Gabriel released his third album, that kind of opened up a whole new world for me.”

The Moonalice poster exhibition and gig at the Brooklyn Bowl in April of 2012 helped cement some of the relationships he’d been developing with his fellow artists. “Brooklyn was awesome,” he says. “I had no idea what to expect. The Moonalice people just treated us wonderfully, and it was a fantastic venue, with a bowling alley, a bar, and a stage. Before the show, Roger met with all the poster artists and gave us all quite a pep talk about how poster art has been underappreciated, and how he was going to see what he could do about that. It just made you feel good, like you’re among people who have the same goals and aspirations as you, the same mindset.” 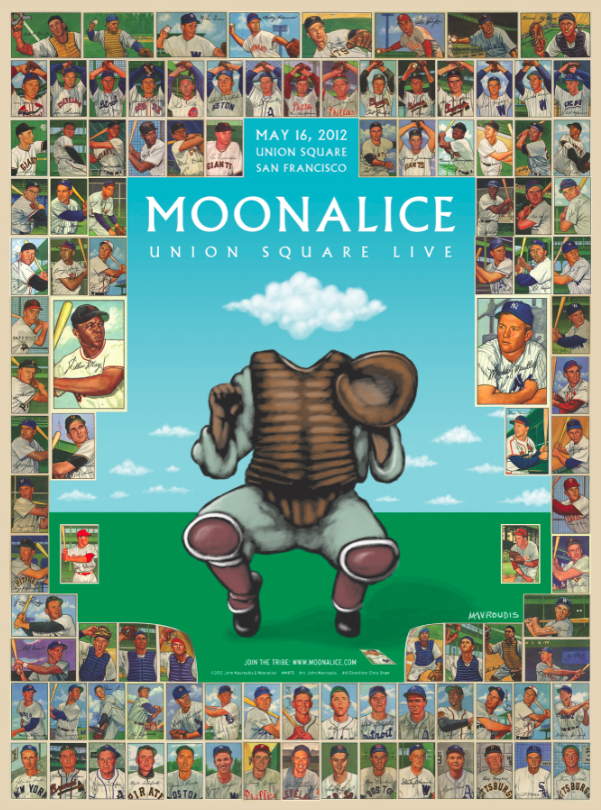 This poster for a 2012 Moonalice show features reproductions of the entire Bowman 1952 set of baseball cards.

One of his latest posters for Moonalice is perhaps indicative of the sense of artistic freedom he’s feeling. Created for a free show in San Francisco’s Union Square in May of 2012, the surreal poster features a catcher in full squat, mitt in hand, his head replaced by a puffy cloud floating in a René Magritte sky. Surrounding this apparition are baseball cards, and not just any baseball cards but a complete set of 1952 Bowman portraits of Willie Mays, Mickey Mantle, and other greats of the game. “The ’52 Topps set is probably the gold standard of baseball cards,” Mavroudis says, “but the ’52 Bowmans are like little masterpieces. They’re so beautiful.”

Baseball, you see, is another early influence on Mavroudis’ art. “I always wanted to do something with baseball cards,” he confirms. “I thought the Bowmans made a really nice frame for the illustration I was working on. I tried to do it in a playful way, like grouping all the pitchers with their arms over their head, all the left-handed hitters, the right-handed hitters, the catchers. I put a bunch of Phillies in prominent places because Roger is a big Phillies fan, but the show was in Union Square, so of course there were a lot of Giants in there, even if they were still wearing New York uniforms back in 1952.”

Devils, Doves, and World War I: The Rock-n-Roll Posters of Gary Houston

Music and Concert PostersFor jazz fans, a poster of Chet Baker almost seems to come with its own sou…