In the course of writing about Elvis Presley memorabilia the other day, I found myself spending a lot of time looking at Elvis Presley records, particularly the 45s and 78s he cut at Sun Records for Sam Phillips.

One of the terms that kept popping up in the descriptions written about the King’s 45 rpm singles was “push marks.” I could see them beneath the label (look for the circular indentations to the left of the word “That’s” in the photo above-left, and to the right of the word “Kentucky” in the photo above-right), but it took a while to find an authoritative source to explain how they got there.

Music appraiser Stephen M.H. Braitman, who gave us a fascinating interview about the British Invasion last summer, pointed me to a site called WorldLingo and this description of record manufacturing: “Each stamper [the negative used in a hydraulic press to make the actual vinyl disc] was next centre punched; methods used included aligning the final locked groove over three pins or tapping the edge while rotating under the punch until the grooves could be seen (through a microscope) to move constantly towards the centre.”

“Sun Records,” says Braitman, “obviously used the method of aligning the stamper over three pins, which, on the final vinyl result, looks like ‘push mark’ impressions.” In other words, the impression was made while the disc was still warm, transferred from the stamper to the vinyl. 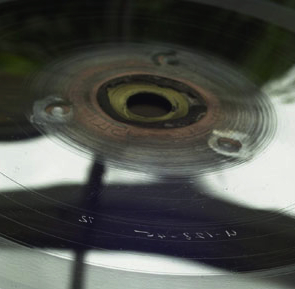 Confirming this view of events is John Boija, whose website chronicling the details of the 45s, 78s, and LPs recorded at Sun was recently added to our Hall of Fame.

“To the best of my understanding,” says Boija, “the push marks stem from the so-called stampers, the metal plates used when manufacturing the records. You can see them quite clearly on one of the preserved stampers for Elvis’s debut, Sun 209, which Joseph Pirzada in the U.K. owns.” See photo at left.

“Now, when one checks the early Sun 45 rpm releases one by one,” Boija continues, “it is easy to note that many—but not all—have push marks. Why is that? Well, the scarcity of the majority of the pre-Elvis Sun 45s makes it difficult to verify, but my theory, based on some of Sam Phillips’s correspondence with the companies that made the stampers, is that the releases that were anticipated to only have limited commercial success were done in small quantities—often in increments of 500—locally in Memphis. Those pressings always have the so-called push marks.

“But when a record became a hit, neither the Memphis pressing plant (Plastic Products on Chelsea Ave.) nor the local distributor (Music Sales, also on Chelsea) had the capacity to merchandise and distribute satisfactorily outside of the South. The first national hits like ‘Bear Cat’ by Rufus Thomas, Jr. (Sun 181, released March 1953) or ‘Just Walkin’ In The Rain’ by the Prisonaires (Sun 186, July 1953) were mainly pressed and distributed in Los Angeles. The former I have never seen with push marks, the latter both with and without, depending on which pressing plant was used.

“This is the explanation for why genuine Sun releases from the 1950s can be originals both with and without push marks, but in the case of Elvis, push marks have become synonymous with being the real deal—it takes both skill and experience to identify the genuine non-push marked originals.

“The very last number I’ve seen with push marks,” says Boija, “is Sun 236 by Jimmy Haggett, a single that sold so poorly most collectors have never seen it. Released in December 1955, it probably wasn’t run in more than 500 copies. I’ve seen two copies and both had push marks. Apart from that, Sun 231 by Charlie Feathers, another ultra-rare release from December 1955, also has push marks, as so do most earlier releases, unless they were large hits pressed out of town from the start, mainly for Elvis, Johnny Cash, and Carl Perkins.”

As an aside, Boija has some advice for those who might ignore Sun’s 78s, which are easily identified by their small center hole, the rooster logo above it, and the horizontal bar that reads “RECORD COMPANY.” Sun 45s, he says, were made from “the poorest quality vinyl and were pressed with a groove width designed to handle the thicker 78 rpm stylus, as compared to the thinner ‘Microgroove’ needle that was introduced with the LP format.” So, when you play your Elvis 45s on modern equipment, Boija says, the result is what’s known as “the Sun hiss. Most collectors have never realized that if they play the records with the correct needle, they sound much better. In terms of dynamics, sound quality, and clarity, not even a mint 45 comes close to the 78s. A pristine 78 even beats the CD reissues.”

Beatles 45s To Make You Twist and ShoutMod Began Here: The Spot Where '60s Teens Danced All Night to Northern Soul Music 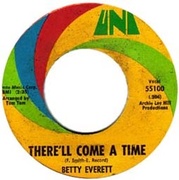