This article notes some of the rarities found in china items, which are highly sought-after by the avid collector. It originally appeared in the December 1941 issue of American Collector magazine, a publication which ran from 1933-1948 and served antique collectors and dealers.

It is always a matter of pleasure to collectors, who visit antiques shows, to find the commercial aspect made somewhat less obtrusive by the presence of educational exhibits. The managers of the larger shows have given consideration to this phase of their business, off and on, during the past few years. 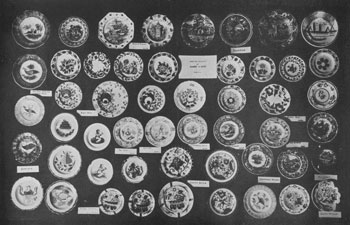 Illustration I: An Assortment of Rare China Cup Plates: A great many of the designs shown here may be found in other pieces. In the top right-hand corner is a rare specimen in soft paste, depicting a boat, crudely done. Few pieces in this pattern have ever been found. It is known to some as the "Lake" plate and to others as "the boat." A similar design is known in a large plate and it is probable that it was made in complete sets at one time, because plates, sugar bowls, molasses jars, and cups and saucers have been found as well as the cup plate.

Last year the Antiques Exhibition held at the Y.M.C.A. at Morristown, New Jersey, devoted a room to special loan exhibits. These included Lacy Sandwich glass miniature Blown Molded or “three-mold” glass; offhand blown pieces; and a case filled with reproductions, so that unwary buyers could see, first-hand, what to avoid.

The showing proved to be so successful that this year it was decided to devote the largest room on the second floor to an even larger exhibit for the benefit of the visitors. Again there was a case of rarities in Lacy Sandwich glass; rarities in beautiful blown sugar bowls and historical flasks; and also varied types of glass representative of various early factories from different sections of our country. But the high light of the loan exhibit this time were rare cup plates; both in china and in glass.

Mr. Albert Marble has long been associated in our minds as the pioneer collector of these interesting bits of glassware. His collection is probably the most complete in existence, and he was kind enough to share his good fortune with all those who visited the Morristown show. Loan exhibits represent time, trouble and expense to the owners, but I am sure that several thousand people both enjoyed and appreciated the effort that went into making that part of the show a success.

Mr. James H. Rose of Canton, Ohio, Mr. Sam Laidacker of Scranton, Pennsylvania, and Mr. and Mrs. Harry High of Reading, Pennsylvania, also were leading exhibitors of cup plates. Mr. Rose, in particular, had to come a long way in order to display his plates, which have long been a specialty with him.

In Illustration I may be seen a few of the rarest and most colorful of Mr. High’s china plates. Of course, their beauty cannot be illustrated in this picture, because their color is all-important. In the top right-hand corner is an extreme rarity in soft paste, depicting a rather crude boat. Such plates are appreciated by an advanced collector.

Illustration II: The Steamer Fulton: In form, two of the plates are octagonal and one round. Each is a variation. The number of serrations in the edge, slant of the ship, and the detail of design in the border varies.

Few pieces in this pattern have ever been found. Mr. High relates that some people call it the “Lake” plate and others “the boat.” Neither name seems quite adequate. In Mrs. High’s family a large plate in the same design was handed down by her grandfather, who always claimed it came down from Adam and Eve! It is a somewhat crude and poor quality of soft paste, so it may have been an early attempt to make the ware in this country. It must have been made in complete sets as plates, sugar bowls, molasses jars, and cups and saucers have been seen, as well as the cup plate. In fact, a good share of the designs shown in Illustration I may be found in other pieces.

Other rarities shown among the china cup plates are several in Gaudy Dutch, including the choice War Bonnet and the Butterfly patterns; a number in spatter, a choice item being the third from the left in the bottom row (yellow spatter with pink thistle center); several spatterware with pea fowl; and a number decorated in lustre.

Among Mr. High’s rarest plates are those in the historical series of old blue, but it was not possible to photograph these and show detail. The same holds true of the glass cup plates. It was a matter of deep regret to me that these collections could not have been shown in their entirety, but there were too many in each case and the detail is too thin to picture them adequately. Mrs. High’s collection is of glass plates, instead of china, so her husband’s hobby does not conflict with her own. She displayed many rarities in her special field. 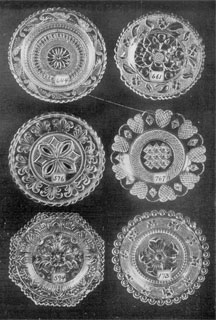 Illustration III: Six Rarities in Conventional Cup Plates: These were selected at random without respect to their place of origin. Number 576 has a center often seen in the Heart series of Sandwich fame, but the border has a very unusual design. Number 767 is one of the rarest of the Heart series, containing only nine hearts.

Mr. Rose, coming from Ohio and realizing that eastern collectors would have on display extreme rarities representing largely eastern (New England) types, contented himself by contrasting a number of Midwestern rarities, with the eastern types.

Illustration II pictures three plates of the steamer Fulton, all thought to be of Midwestern origin. At least, this plate is always referred to as the Fulton. Two are in octagonal form and the third round, but each is a variation. Often the difference in two plates, which appear at first glance to be identical, is in the number of serrations in the edge. Again, the slant of the ship or the detail of the design in the border varies.

Cup plates have been divided by collectors into two categories; that is, into conventionals and historicals. Needless to say, the historicals have to do with some momentous event in the history of our country. The conventionals are simply what the name implies — conventional designs. Altogether, counting all the variations, there are about a thousand plates on which collectors may concentrate.

There are many rarities in color. Mr. Mable devoted one case to these and they attracted considerable interest. He also displayed, alongside old ones, the reproductions which have appeared to date. When shown in this way, the differences between the old and the new may be readily seen. Illustration III shows six rarities in conventional plates, selected at random without respect to their birthplace.

Altogether, collectors will find much to enjoy in these little gems of early glass-making, whether they go in for rarities or the more common patterns. A sensible hobby does much these days to nullify the effects of the catastrophic course of world events.