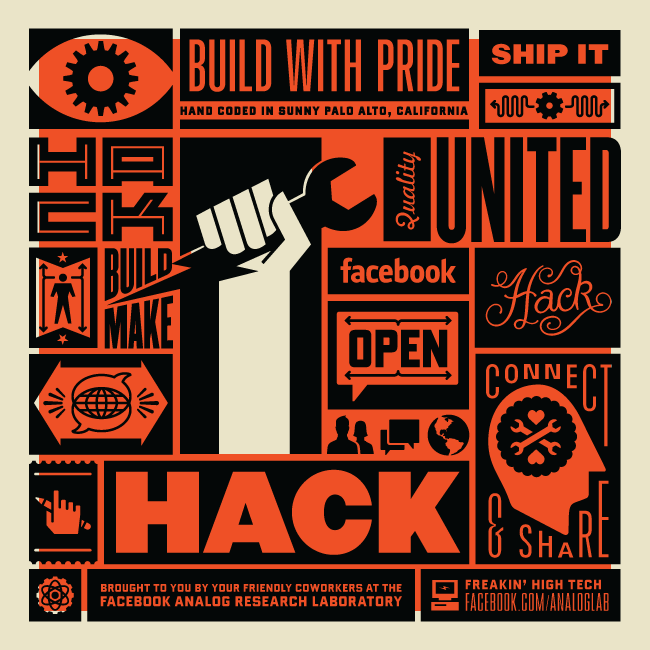 On February 1, 2012, at exactly 5:02 p.m., the day Facebook announced it was finally going public, the company’s CEO, Mark Zuckerberg, posted a photograph of his desk on his personal Facebook page. Along with a MacBook Air, dry-erase marker, and bottle of G Series Gatorade, Zuck’s work station featured a plain white poster bearing the all-caps red message, “STAY FOCUSED & KEEP SHIPPING.”

Earlier that day, at 11:48 a.m., Ben Barry posted an image of the same poster on the Facebook Analog Research Lab’s Facebook page with this message: “New posters in the Building 16 2nd floor micro kitchen (by the bridge). Stay focused.”

How did Barry get the jump on his boss? Well, he printed the poster. As co-founder of the Analog Research Lab, Barry is one of several people at Facebook who carve out time from their other duties to spread Facebook’s grassroots gospel around the company’s campus.

Since the summer of 2010, when he and another Facebook designer Everett Katigbak (they were hired on the same day in 2008) began filling a Palo Alto warehouse space with printing presses, a darkroom, and even a few woodworking tools, Barry has been letterpressing and screenprinting posters with simple, propaganda-style messages like “DONE IS BETTER THAN PERFECT,” “MOVE FAST AND BREAK THINGS,” and “WHAT WOULD YOU DO IF YOU WEREN’T AFRAID?” 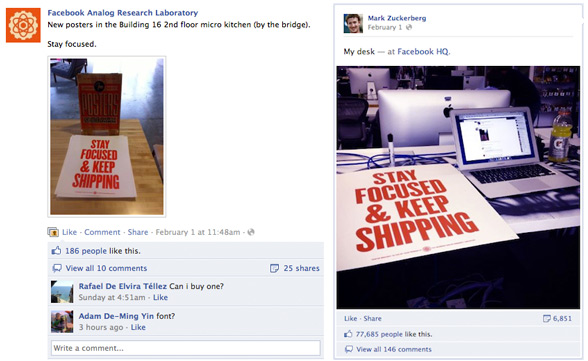 On the day Facebook announced its IPO, the Analog Research Lab had spread word of a new poster by noon. By 5pm, CEO Mark Zuckerberg had posted a photo of his copy.

Most of these messages are printed on white paper in Speedball Fire Red rather than Facebook’s famous blue. “I wanted a color that was straight out of the can so I wouldn’t have to mix it each time,” Barry says. “I also wanted something that was going to be really bright, really loud and noticeable. The red-type posters are just down and dirty, designed to get a message up on the walls as quickly and efficiently as we can.”

As for the messages themselves, Barry says they come from the bottom up. “The executives aren’t setting these messages,” he says. “People e-mail them to me, or whatever, and then I make the posters and we put them up. We’re not asking for permission or anything like that.” 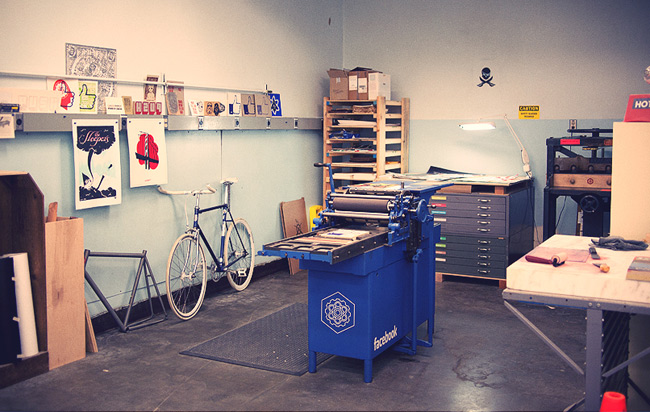 A view of the “Lab,” which bears a striking resemblance to a print shop.

On paper, Barry seems an unlikely individual to help set the corporate tone for a company with an estimated $100 billion valuation, but maybe that’s why he’s had such an impact at Facebook. A graduate of the University of North Texas in Denton, where he studied communication design with an emphasis on graphic design, Barry spent a year in 2007 and 2008 working at The Decoder Ring in Austin, where he assisted various visiting artists with their specialty screenprinting projects. Before he was hired at Facebook in the fall of 2008, there were only two people on the communication design team. The week Barry joined the company, the team grew to five.

“When I left Decoder Ring and came to Facebook, I didn’t have access to a print studio anymore. Even as early as my interview at Facebook, I was discussing with the designer who became my manager the idea of screenprinting posters here. So it was always an idea that I was kicking around. 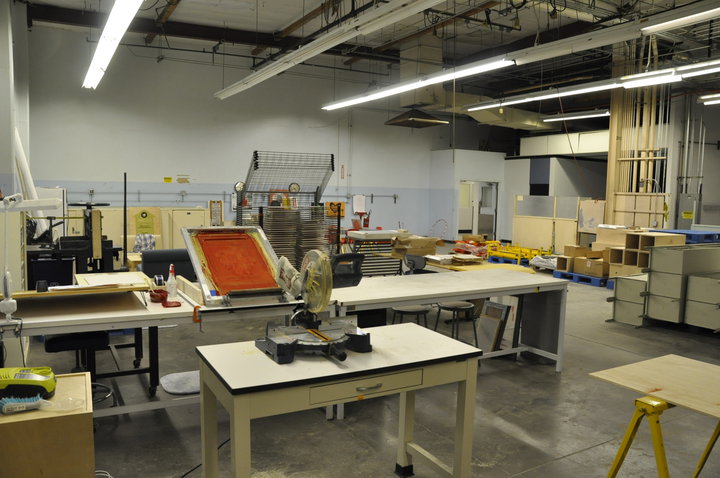 “We didn’t have the space for quite a while,” Barry continues. “Then in 2010, around May, we outgrew the building we were in. We were renovating another one down the street, and part of the lease on that building included a big warehouse. I was helping consult with the architects to translate Facebook’s culture into the architecture and design of our physical space, so I knew the guys on the facilities team. From them, I was able to get access to the warehouse. I started building out the stuff we needed to have a print studio, sort of in secret. I didn’t really tell too many people what I was doing.”

With work tables and shelves left by the previous tenant, printing equipment purchased by Facebook, and an exposure unit and washout booth built by Barry on weekends and after-hours, the warehouse was soon a functioning studio. “I just started cranking out posters, especially in that first month,” Barry recalls. “I gave it the name the Facebook Analog Research Laboratory to create a brand for the lab, so it wasn’t just me. Then I started putting posters up all around the company.” 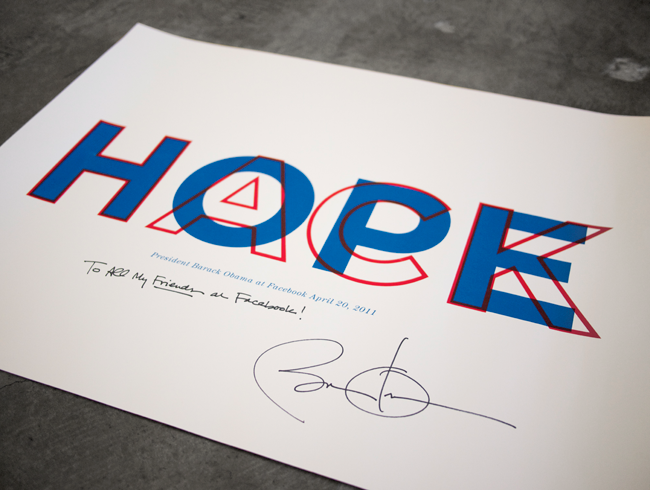 When President Obama visited Facebook in April of 2011, he autographed a copy of the Analog Research Lab’s “HACK HOPE” poster.

You’d think a firm with as many resources as Facebook wouldn’t need to rely on the passion of a renegade screenprinter to spread its internal messaging, but corporate cultures, especially those in the Silicon Valley, live and die on the passions of their people. For Barry, having an in-house print shop, fancy name or not, also had practical advantages. “It’s a lot more work, but being able to have an idea, design it, and then print it in a matter of hours is just amazing. You’re able to do things quicker and you have more control than if you had to send it out.”

But wouldn’t posting Facebook’s internal messaging on, oh I don’t know, Facebook be even faster?

“I think print and paper have a place at Facebook,” Barry maintains. “In the past, you’d make a poster for a concert, movie, or something like that because it was the most efficient way to distribute information about when an event was and how much it cost. But all that sort of information has been completely cannibalized by the Internet. That traditional function of a poster, to actually distribute information, is gone because I can get it through Facebook, other websites, and so on. 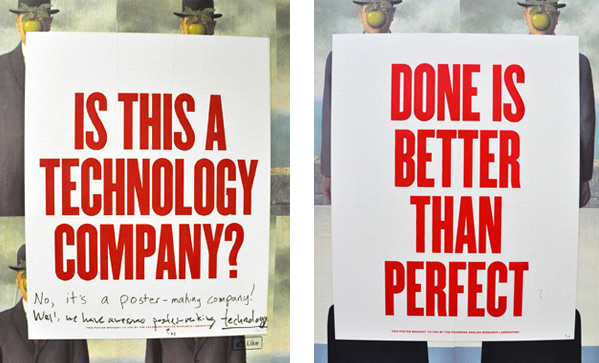 The Lab’s propaganda-style posters are meant to provoke comments, and often do.

“We’re barraged with e-mail all the time,” he adds about life at Facebook, “but when you go to the café for lunch and you see one of the posters while you’re waiting in line, I think it has a more of an impact.”

For Barry, posters do even more than just cut through the electronic clutter that sites like Facebook have helped create. “Posters give us something to share back to Facebook,” he says without a trace of irony. “A really great example of this is the ‘STAY FOCUSED & KEEP SHIPPING’ poster. I’ve seen numerous photos in my newsfeed of that poster being reshared. It’s like when someone snaps a photo of a bridge or landmark and shares it more broadly. In the same way, a poster becomes interesting content to share.” 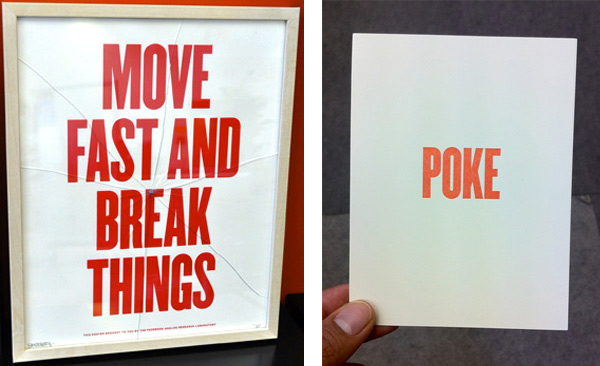 The frame on this “MOVE FAST AND BREAK THINGS” poster appears to take its message to heart. At right, a “POKE” postcard pokes fun at the Facebook term for getting another Facebook user’s attention.

Some people are already sharing hard copies of their Facebook content in a very old-fashioned way. “We recently launched Timeline business cards,” he says. “With Timeline, you’re able to have a profile picture, your name, and other information. Through MOO Cards, you can now pull in your cover photo and stuff, and they will print a set of Facebook business cards for you. It doesn’t say Facebook on it or anything like that—it’s just your information, your content. To me, that’s a really interesting translation, taking this online content and giving it a physical form.” 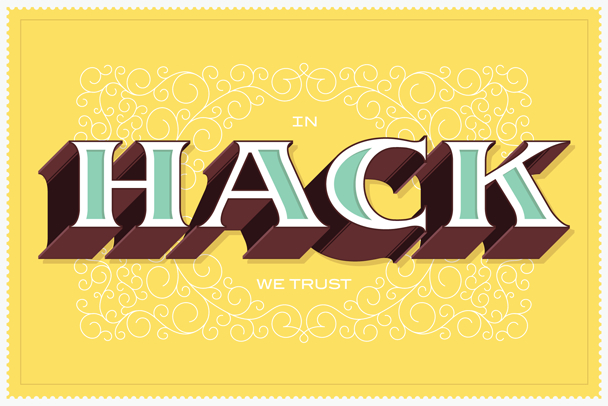 “IN HACK WE TRUST” was screenprinted in nine colors for a 2010 Hackathon at Facebook.

When it comes to posters, some of the most shared images produced at the Lab are the ones created for Facebook’s periodic Hackathons, including Barry’s nine-color screenprint that reads “IN HACK WE TRUST.” “When I first came here, Facebook was already doing these Hackathons, where engineers and anyone could come together and work on a project or idea that maybe they haven’t had time for in their day job. It usually starts at about 8 o’clock at night and goes until 6:00 in the morning. The energy level is really high as people rapidly prototype their ideas. At the end, everyone gets up and gives a two-minute pitch. It takes hours to get through everything. It immediately struck a chord with me.

“The word hack,” Barry continues, “has an unfortunate negative connotation in the mass culture, but a hack is what you do, it’s the action that you take. When we talk about hackers, we’re talking about people who are tinkering to find the most efficient way forward. They don’t try to get it right the first time. It’s more like, ‘let’s see what we can hack together.’ That’s the verb.”

In fact, “IN HACK WE TRUST” was itself a bit of a hack. “It definitely would have been helpful to have a vacuum table,” says Barry of printing rigs that suck the paper being printed onto the table surface to keep them from sticking to the screen. “It’s something I’ve looked into purchasing or building but just haven’t gotten around to yet. With the nine-color ‘HACK’ poster, the only color that gave me trouble was the yellow because it was a really big flood of ink. But there are lots of tricks you can do. You can spray a light layer of adhesive to your table. You can print off contact so the screen naturally wants to pull away from the paper after you push the ink through it. We do a lot of things like that to make it work.”

For Barry, one of the most satisfying results of the posters he’s created at Facebook may be the appearance of ones he hasn’t had anything to do with at all. “Recently, our security team commissioned a Hack poster that they put it up, so people here have taken to this poster culture. Posters I have nothing to do with pop up all the time, which is pretty awesome.” Presumably, that’s how Mark Zuckerberg feels about the Analog Research Lab’s posters, too.

Dawn of the Flick: The Doctors, Physicists, and Mathematicians Who Made the MoviesMondo: The Monster of Modern Movie Posters