In this interview, Dan Edminster discusses antique oil lamps and glass lampshades (and their manufacturers), and gives advice to novice collectors. Based in Hurleyville, New York, Dan and can be reached through his site, The Lampworks, which is a member of our Hall of Fame. 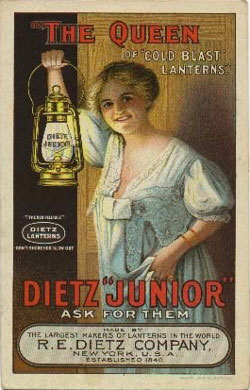 My grandparents were antique collectors all their lives, their whole house was furnished in antiques. They had a lot of oil lamps and I suppose that’s where I got my first interest. I’ve always had more of an interest in the glass lampshades than the lamps but it kind of just evolved into lamp collecting instead of glass, and not pattern glass per say, just colored glass.

I started out collecting miniature lamps and built up a collection of maybe forty, nothing high end, just mid range collectibles, then I got into hanging lamps, especially hanging hall lamps. But it got to the point where I had too many hanging around the house and so I started selling more than buying.

I’m particularly interested in patent research right now, and especially Holmes, Booth and Haydens. I’ve always been interested in their stuff, because they had a lot of diversity in the burners they made. I like the less run of the mill, mass-produced manufacturers. And I’ve always been interested in the parts, that’s always been my niche. I started buying any lamp parts I could find 12 or 15 years ago to complete my own lamps and at that time it was quite easy to find boxes of parts in antique shops. But as things switched over into multi-dealer shops, parts became more scarce. Originally I didn’t sell parts, but then I ended up getting so many I decided I might as well sell them.

The high-end collectors are very interested in rare burners and chimneys. All my research has evolved around the manufacturers of burners. It’s always been about a burner I found, I would start to do research on who made it and it kind of went from there.

Collectors Weekly: What’s the difference between hand made and machine made chimneys?

Edminster: The earlier lamp chimneys were all hand blown, free-form, and finished by glass blowers. At some point they introduced molds to get a consistent form, but they were all still blown by hand. Later the whole process was mechanized and they were all done by machine. There are some mold-blown chimneys with embossed patterns that are quite scarce. But by and large, the hand done stuff with the peddle tops and frothed or etched designs (which doesn’t necessarily mean it was hand blown), that early and limited production stuff is much more scarce and in demand.

Most novice collectors haven’t really formed a definite focus for their collection, they just start out collecting lamps. You just go to a flea market and see lamps you love and then you start to see a few more lamps and think they’re neat and they have common burners and common chimneys, just plain jane lamps. But as you start to research and read some books on lighting, you tend to kick up your collection and start looking for more scarce burners and chimneys or some color glass examples.

Collectors Weekly: What can you tell us about the different types of burners?

Edminster: The burner was the device that took the fuel and was the point of combustion. It evolved over many centuries, but the design is generally the same. It’s simple, a piece of brass molded into some form to hold a wick, and a chimney, which protects the flame from the air and aids in combustion by creating a draft.

I’ve always been attracted to earlier models because I thought they were better constructed or heavier. A lot of them were cutting edge at the time so the earlier designs set the pace and there really wasn’t much improvement to be made. Anything that’s really unusual or rare peaks my interest, especially stuff I’ve never seen before. I’ve been collecting for 20 years and I see new stuff often enough, sometimes on eBay, it never ceases to amaze me.

That’s one of the neat things about the Internet, you see stuff you never would have seen in your lifetime, unless you traveled the circuit of the big lamp and glass auctions. Rare burners hardly ever came into the market place in local shops. The internet has also driven the price way up. The lower end things are driven lower and the higher end things are driven higher.

Collectors Weekly: How did you pick the lampshades to display on your site?

Edminster: Back in the day, many lamps were sold so you could customize them. You could walk into the lamp shop and buy a complete lamp off the floor or you could buy the base and the trimmings separately. So-called “Gone With the Wind” lamps, with the base painted and the shade to match, those were sold as-is, but the banquet lamps maybe had a brass base, and you could put any type of shade on it. With the hanging lamps, if you wanted prisms on them, you could get the crystal clear prisms or the colored ones to match the shade.

Collectors Weekly: Tell us more about the glass shades… who made them?

Edminster: Most of them made the metal parts and bought glass from other companies. For example, Holmes Booth and Haydens would sell lamps in their shop and make the base and the burner, and buy the glass shades from glass companies like Fostoria or Consolidated.

There were the plain opal shades made with milk glass, which was pretty utilitarian and inexpensive. Then there was the case glass, really like an overlay, two different layers of glass, with the inside white to reflect more light and the outside colored, you see the green and white combination quite often. There were different types of art glass shades, satin glass, amberina, cranberry, and mother of pearl. Those shades were more expensive back then and those are the shades that command the high prices today.

There were different types of paper shades, like the lamp shades you can buy today for an electric lamp, smooth and silkscreened or lithographed, sometimes pleated or made out of cloth. There were shades made out of metal, really just about any kind of material. Paper shades aren’t as durable from a collectors standpoint, and wouldn’t command some of the prices of an art glass shade, but if they survived this long, they’d be worth something.

Collectors Weekly: Do you come across reproductions often? How do you spot them?

Edminster: With experience, handling a lot of lamps, doing a lot of research, and talking to a lot of people. There are certain characteristics of glass that help you distinguish old from new. Sometimes just the feel, the look, the thickness, the way it was molded, the colors can tell you a lot. There’s some stuff on the market today made in the style of the old lamps, not the same molds, but reproduced very similarly and made in colors that weren’t produced back then, some shade of red or blue. The same goes for fake metal parts, which are pretty easy to tell because the repros are mostly all marked. It really comes down to handling hundreds of pieces and I’m sure I’ve bought stuff over the years that was newer and not realized it. Buyer beware.

Collectors Weekly: Do you focus on a specific geography?

Edminster: I only collect from American manufacturers, unless I got something that’s foreign made in a box lot of stuff or on a lamp I purchased. I don’t have anything against them, I just never did much research on the foreign lamps. But there are plenty of manufacturers in England, France, Germany, it’s out there and just as old as the American made stuff.

Most of the manufacturers I research were located on the East Coast in the Connecticut area. New England is where the heart of the manufacturing took place in the United States. Most of the glass manufacturers were on the eastern seaboard, which is one of the reasons most of the lighting seems to be a little more prevalent here than on the West Coast. Manufacturers had stores in all the big cities, Boston, New York, Chicago, so everything was readily available around here.

Collectors Weekly: Are there a lot of lamp collectors?

Edminster: It’s hard to say. There are definitely scores of people out there that collect and spend a lot of money on their collections and have a lot of rare stuff. There are hundreds of people that specialize. After you specialize you start selling and trading up. I’ve never burned my lamps. I’ve been collecting for 18 or 20 years and never bought them to burn them, but there are a lot of collects that do. I’ve heard of someone who heats his house from the heat of Aladdin lamps in the winter time.

Collectors Weekly: What are some good resources for new aspiring lamp collectors? 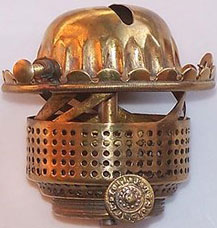 Edminster: I’ve amassed quite a collection of books, I think I own every book that was written on oil lamps and collection. I have hundreds of books and catalogs, some original and some reprinted. And then there’s the Internet.

There’s a network of collectors out there who are willing to share what they have and that’s the nice thing about a lot of collectors, they’re willing to trade information. I’ve been a member of the Historical Lighting Society of Canada and the Rushlight Club for a number of years and you can get a lot of information from their publications. Those two are probably the two premier lighting clubs because they focus on lighting in general, but they also focus on kerosene lighting which is what I do. I don’t get into gas or electric.

The Rushlight Club spans all types of lighting, from kerosene to bicycle lights, really any type of illumination. A lot of heavily researched articles, newsletters, and old lighting catalogs, have come out through Rushlight. I think it’s important if you’re collecting to join the club because you’re going to be able to network with like minded people. They give you a members list with collecting interests, so if you collect whale oil lamps you can look through the list and find who else is collecting the same thing. Give them a call, they’re really good people, willing to share their knowledge.