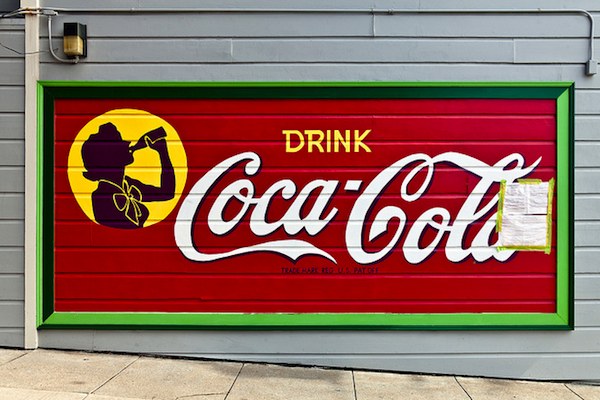 A recent objection to this antique Coca-Cola sign—which has been lovingly restored since its discovery in San Francisco’s Bernal Heights neighborhood in 1991—has caused quite a hullabaloo this year. In January, an anonymous NIMBY filed a complaint with the city, which cited the 15-by-7-foot sign as an illegal billboard. It wasn’t long before the city got worked up into a fervor: Neighbors, bloggers, and history buffs rushed to defend the mural’s historic value, while detractors complained about corporate advertising, shilling a sugary drink right across the street from an elementary school. Building owner Richard Modolo, meanwhile, faced pricey fines and permit fees.

The sign is still up. Just last night, Supervisor David Campos, a city lawmaker who represents Bernal Heights, announced his support of the mural. While Campos had expressed sympathy for the anti-consumerist camp (“We’re trying to fight childhood obesity. We don’t want to promote kids drinking Coca-Cola.”), he now says he plans to work with the city attorney on legislation that would allow the antique advertisment to be exempted from the city’s strict anti-billboard laws. For what it’s worth, one of the first things people driving into San Francisco from the Bay Bridge see is a giant, flashing neon Enjoy Coca-Cola billboard, located smack downtown.

The building, now Modolo’s house, once held a corner store called Tiptons Grocery. Local bloggers estimate the Tiptons ran the grocery between the late 1940s and late 1960s, when Bernal Heights was a bustling working-class neighborhood. Last week, the Bernalwood blog caught up with Modolo, who has lived in neighborhood since 1954. He has fond memories of “Mrs. Tips” at the store, from when he was attending Paul Revere Elementary school across the street, which he shared with Bernalwood‘s Todd Lappin in this video.

“She’d write your lunch order down on a brown paper bag,” Modolo explained. “And at lunchtime, she’d have the sandwiches all ready to go for ya. They had the pickle jar out. For 5 cents, you could get a pickle added to it. When it was hot, she’d put orange drinks in the freezer and freeze ’em.” 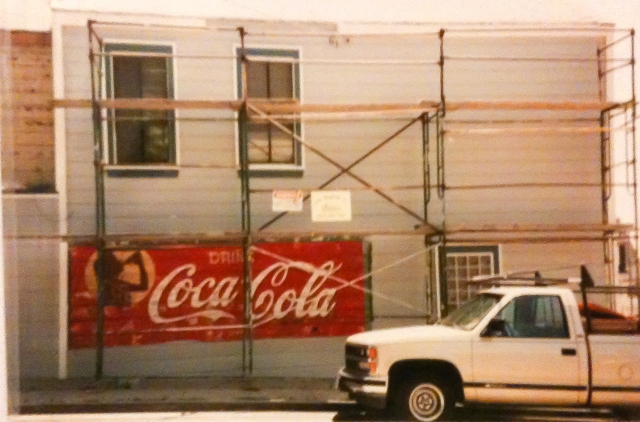 The sign is what’s known as a “ghost sign,” a vintage painted advertisment uncovered during changes to the urban landscape. In this case, Modolo found the sign intact, which had been preserved by tar paper, when he removed asbestos siding from the building in ’91. At the time, neighbors asked Modolo to restore the sign, which he has repainted three times in 20 years. Local records reveal the siding had been installed between 1949 and 1956.

The sleuths at the Burrito Justice blog contacted the official Coca-Cola company archivists and learned this: “The girl in the image is referred to in ‘Coke Lore’ as Silhouette Girl. She was used from 1939 until around 1950. She is significant in dating items as she was one of the few characters that was used during the time we transitioned our ‘Trademark Registered’ statement from the tail of the C in ‘Coca’ to being placed under the words ‘Coca-Cola.’ This transition occurred between 1941 and 1942. The first thing I noticed with the sign was the mark was under the words so it had to be later than 1942.”

This led Ted Ryan of Coca-Cola Conversations to conclude: “If you had to pin me to a date, I would say that based on the placement of the word ‘drink’ and the use of the Silhouette Girl, the original would be from 1946 or so.”

Check out more images of Silhouette Girl and 1940s Coca-Cola logos on Burrito Justice. Let us know what you think about this controversy.

(Top photo by Troy Holden. The 1991 image is from Richard Modolo, via Bernalwood)

Coke SignsFew brands have been as effectively and aggressively marketed as Coca-Cola,…

CokeFrom its invention by John S. Pemberton in 1886 to today, Coca-Cola has bec…