The Art of "Star Wars": The Force Behind the Most Iconic Image in the Cinematic Universe 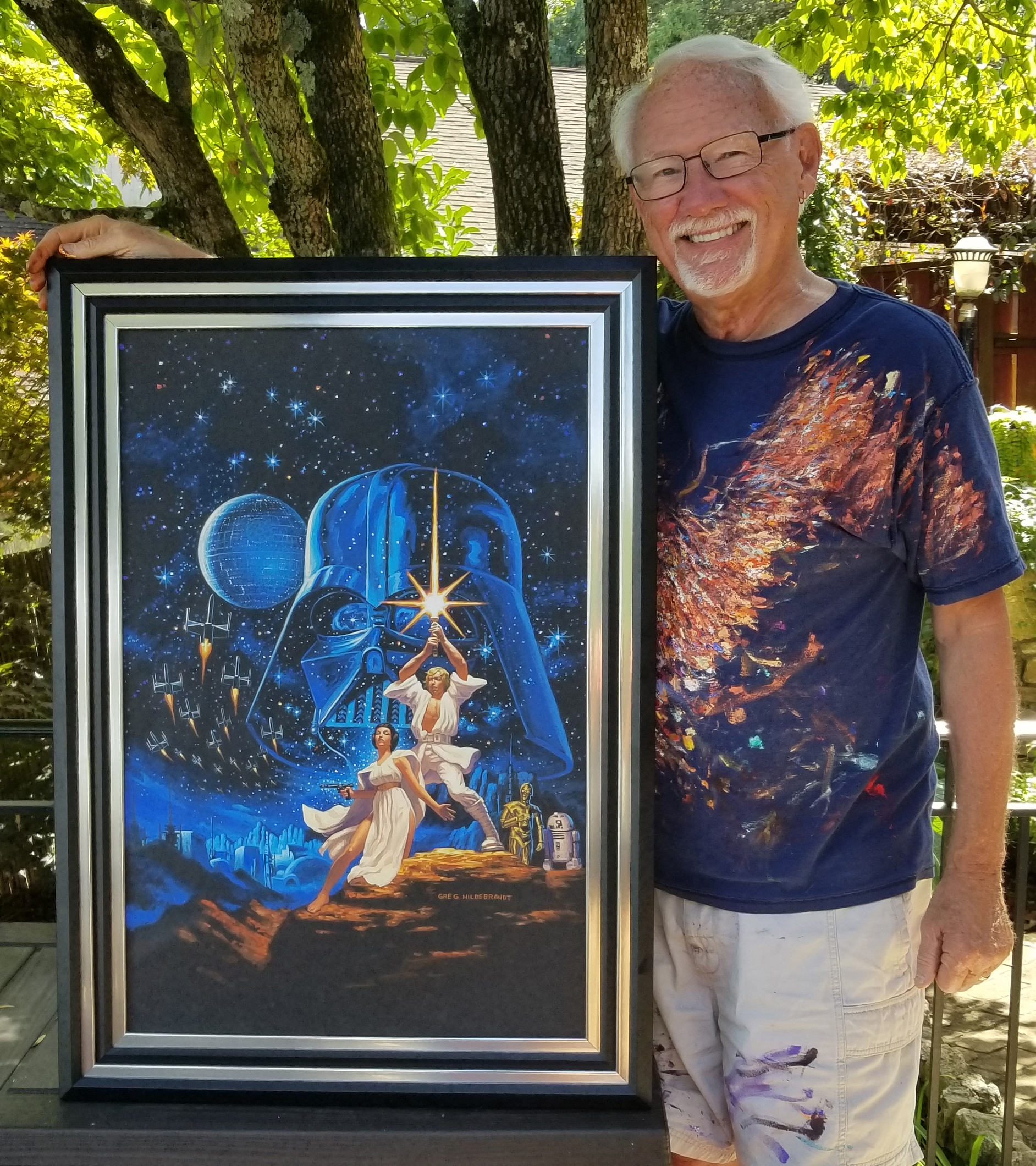 Earlier this year, when we reported on DJ Ginsberg’s and Marilyn Wagner’s mammoth collection of movie-ad print blocks and printing plates, scores of these stellar pieces of cinema history from the early 1930s to early 1980s caught our eye. There were ads for Bogart and Bergman in “Casablanca,” Elvis Presley in “King Creole,” Sean Connery in “Dr. No,” and Judy Garland in “The Wizard of Oz.” If the Academy of Motion Picture Arts and Sciences had a category for Best Print-Advertising Archive, Ginsberg and Wagner would surely have themselves an Oscar.

“I wanted to see what it would be like to do the painting without my brother.”

One of these reverse-image movie ads, though, was in a class by itself—the print block for the very first “Star Wars” film (we refuse to call it “Episode IV” or “A New Hope”), released in 1977. When struck, or printed, on a sheet of paper, the reverse image on that block becomes a positive of an uncharacteristically ripped Luke Skywalker, his shirt open to reveal a tight six-pack, alongside a similarly uncharacteristically buxom Princess Leia. And just below these two (spoiler alert!) siblings is the last name of two more, “Hildebrandt,” as in the Brothers Hildebrandt, Tim and Greg. They were working together in 1977 when they were hired by a New York ad agency called Smolen, Smith and Connolly to create a painting would soon be referred to as the “Style B” poster for “Star Wars,” which was also used as the basis for the “Star Wars” print block.

Since our story was published in March of 2018, Ginsberg and Wagner have decided to strike the Hildebrandt-designed print block in an edition of 3,000. Each 8 1/2-by-11-inch strike is printed on heavy white archival paper and signed and numbered by Ginsberg, who is also the printer. This means “Star Wars” fans can now collect yet another variation of one of the most enduring images in the “Star Wars” franchise. 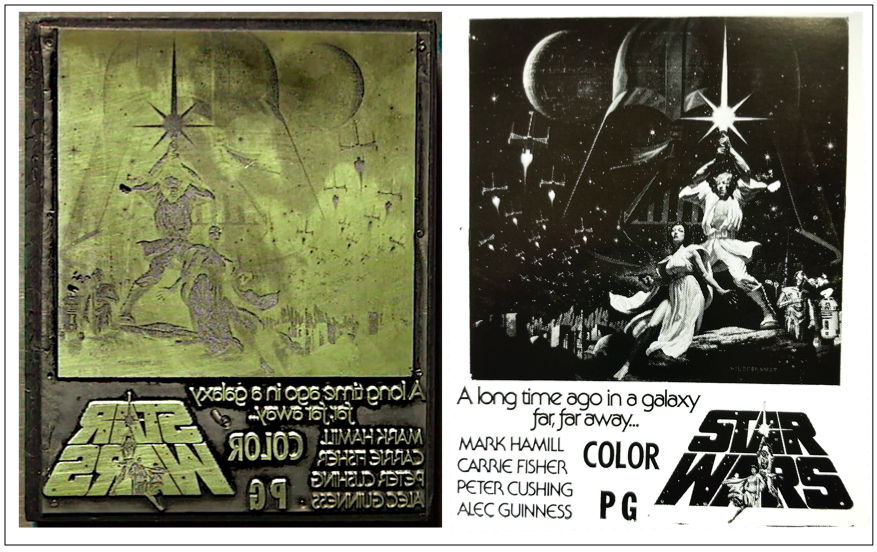 Top: Greg Hildebrandt with his new re-creation of the painting he and his brother, Tim, produced for a “Star Wars” poster in 1977. Above: The same 1977 image on one of DJ Ginsberg’s and Marilyn Wagner’s print blocks (left), with a strike of the block (right).

Coincidentally, Greg Hildebrandt (Tim died in 2006) has just painted a fresh copy of the artwork he submitted to Smolen, Smith and Connolly more than 40 years ago. This new “Star Wars” painting will be on view at the Spiderweb Art Gallery booth (#1764) at New York Comic Con (October 4-7, 2018) before it’s put up for auction.

Greg Hildebrandt, now pushing 80, remembers well the circumstances of that painting’s creation. “When the agency in New York called me at my studio about doing the job, they hadn’t seen the film,” Hildebrandt says, even though the movie’s release date was only a week away. “I asked them if they knew what it was about, and they said, ‘It’s some kind of science-fiction movie.’” The film already had a poster by Tom Jung, but Lucas wasn’t totally happy with it. “The guys at the agency told us that Lucas wanted it to be more comic-booky—that was our only direction. So, we went to the agency’s office in New York, were given some black-and-white film stills for reference, and then hopped a train back to my studio in Jersey. We were given 36 hours. On the train, we started asking ourselves, ‘What do they mean by comic-booky?’ They obviously didn’t literally mean a black-ink outline with flat colors, so we went for more of a pulp look and a broader approach in terms of color.” 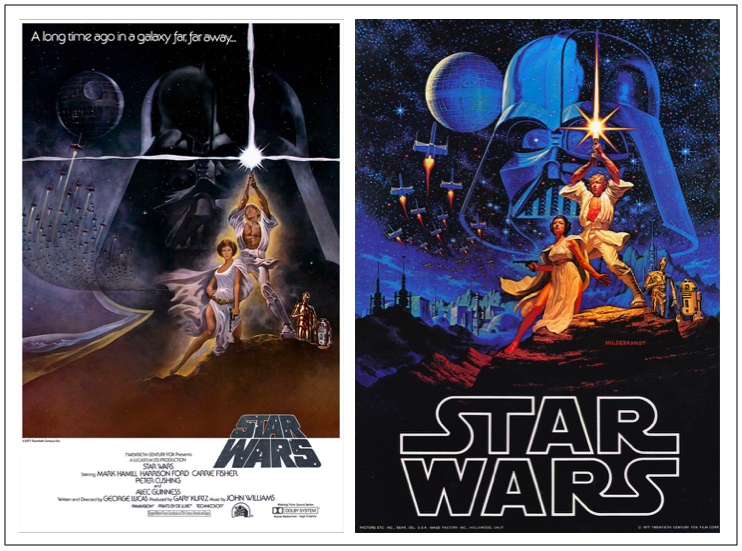 Tom Jung designed the first “Star Wars” poster (left) with Luke and Leia in heroic poses and Darth Vader looming behind them, but Lucas wanted the design to be more “comic-booky,” so the Brothers Hildebrandt were hired. Their version (right) is more colorful, with a pulp paperback feel.

That direction is obvious when comparing Jung’s “Style A” poster, as it’s known, with the Brothers Hildebrandt’s “Style B.” There’s a spooky, sinister blue light on Darth Vader’s helmet and the Death Star in the Hildebrandts’ version, the light on Leia and Luke is warmer, fire rather than mere exhaust appears to propel the fleet of X-wing Rebel Starfighters, and the Hildebrandts added a glimpse of life on Tatooine to the scene. In just 36 hours, they had, indeed, brightened and enlivened Jung’s original composition, but for Greg, something was still missing.

“When we brought the painting back the next day,” he says, “I suggested that we put some other characters in the background—the droids weren’t in there yet. So, the agency folks called Lucas and, apparently, he told them to add the two droids. Someone from the agency actually ran out and bought us the supplies we needed from an art store. We finished the painting in their office. It was crazy.”

No less crazy were the terms Hildebrandt set for himself when he decided to re-create the painting more than four decades later. “I wanted to see what it would be like to do the painting without my brother,” he says. “I wanted to see if I could remember all the colors I used, and I wanted to keep all of the same mistakes that are in the original painting. There is still no likeness to the principal stars because when we did the first job, we were told, ‘Don’t pay any attention to likenesses because nobody knows who these actors are anyway.’ I wanted to challenge myself, mostly just to see what the hell would happen. Besides,” he adds, “I’ve been asked to repaint that thing for years.” 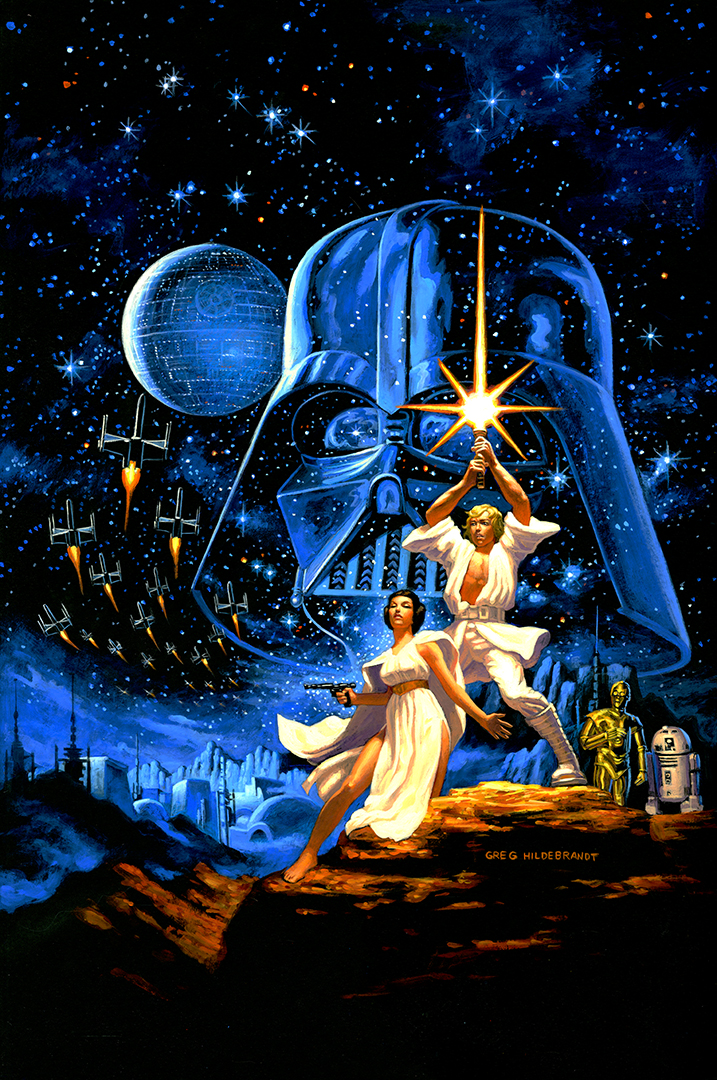 Greg Hildebrandt’s 2018 re-creation of his and his brother’s 1977 “Star Wars” painting will be on view in October at New York Comic Con before going up for auction.

Like a lot of advertising art, the Brothers Hildebrandt never got their original painting back after delivering it to Smolen, Smith and Connolly in New York. “Back in the day, you did a job, dropped it off, waited for your check, and that was it. You never saw the original artwork again,” Hildebrandt says. “It wasn’t like you had signed an agreement stating that the client got to keep it, but you just assumed that it was theirs. Alan Ladd, Jr., the head of Fox studios, ended up owning the painting. A collector in France bought it from Ladd, so he’s got it now.”

In November, someone else will own Hildebrandt’s second “Star Wars” painting, and between now and then, 3,000 people can pick up a print of the original advertisement that still bears his signature within the 41-year-old manufactured printing plate. Which is fine with Hildebrandt. As he told DJ Ginsberg recently, “These plates are really a work of art. I am actually happy to see that when they did the ads they left our signature on the art.”

Is This Treasure Trove of Movie Ads From the Heyday of Newspapers Worth $20 Million?Prop Master: How a "Star Wars" Superfan Scoured the Earth for Space Debris

Star WarsEver since the first "Star Wars" movie was released in 1977, this franchise…

PaintingsFor centuries, painting has been the primary medium of fine art, creating t…