My boss was a bit skeptical when one of my colleagues threw out the idea of interviewing one of the stars of the History Channel’s “Pawn Stars.” After all, pawn shops don’t exactly have the best reputations. Sure they handle vintage collectibles, but most of the stuff they see is nickel-and-dime junk, right? 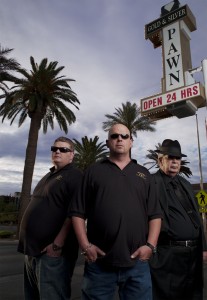 Well, maybe. I always equated pawn shops with the places the cops go to in “Law & Order” when there are stolen goods involved in a case, not the sorts of locales where you find fine vintage guitars and rare antique weapons. Not every pawn shop can boast that it has had Civil War-era swords, Super Bowl rings, and Andy Warhol paintings come through its doors. Las Vegas’ Gold & Silver Pawn Shop, located off the strip on the outskirts of Sin City, where “Pawn Stars” is filmed, can.

Turn on the History Channel on Monday nights and you’ll get a twist between “Antiques Roadshow,” “Real World,” and “American Chopper.” This 24-hour pawn-shop setting isn’t frilly, it isn’t glamorous, but if you are a collector, the show is worth watching. While a majority of the items sold and pawned aren’t antique gems, most of what makes it onto the show are really awesome, highly collectible antiques.

The shop is run by three generations of Harrisons—Richard, Rick, and Corey. You won’t hear them called by those names much, however. The soft-spoken, cowboy grandfather is known simply as “The Old Man,” while the plump grandson is referred to as “Big Hoss.”

While these names, which are manifested through developed personas, may detract from the amount of air time given to the objects themselves, they do add a semblance of plot to each episode, along with some opportunities for pithy humor alongside the rare antiques.

Recently, we spoke to the leader of the Harrison clan, Rick, son of The Old Man, and father of Big Hoss, who opened the shop with his dad 22 years ago. Harrison is one part redneck, one part scholar, and one part businessman. Like his father and his son, he is physically imposing and not afraid to drive a hard bargain. Harrison states that despite his experience in the business, the cool thing about antiques is that he is always seeing something different.

“I’ve been doing this for 30-some years. I’m always trying to learn something because the day you think you know everything is the day you’re going to get burned,” Harrison says. 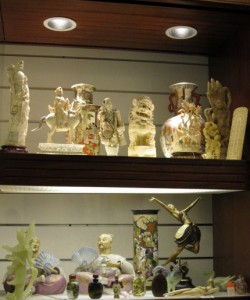 He definitely does see some unique items, whether it is a Spanish-American War-era cannon or a Native American energy totem made by a witchdoctor. Watching the show, if you can get past the family quarrels and such, then you get a glimpse of some pretty cool stuff.

Of course, this is TV, not just reality, so what makes it onto the show are often the most attention-grabbing items, like guns, baseball collectibles, and cars. If Carnival glass and Wedgwood china are your things, this might not be the show for you.

According to Harrison, who is in charge of the store’s 45 employees, guns are one of the most difficult items to appraise.

“A lot of really old guns are hard to value because there are no dates on anything from the 18th century and back—there are no brand names, either, like Winchester, Remington, or things like that. They’re independent gun makers, so you just have to go by the quality of the gun, the functionality of it, and a million other little things like that.”

One of the things that makes this show so appealing to collectors is that Harrison and his family don’t assume to know everything. “I bought a bugle that was made around the 1850s.” he recalls, “Someone had soldered an insignia from, I think, the 7th Cavalry on it, which made it look like a Civil War bugle. But it wasn’t. You learn not to get too cocky.”

Fortunately Harrison has a cell phone full of experts that he doesn’t hesitate to call on to help authenticate and value items. These experts provide great insight into the history of items and why they are collectible. 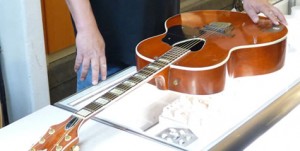 Las Vegas is an entertainment town, which is why the Harrisons have become familiar with guitars.

For collectors, this is the meat and potatoes of the show. Even though it is only a 23 minute program, you are able to learn quite a lot—like that some Civil War swords had blunt edges for use by horse-mounted riders—all from the experts.

While Harrison projects an air of all business, he does draw the line at items he deems inappropriate.

Like many dealers, Harrison finds that one of the biggest misconceptions about collecting is that if something is old, it’s automatically valuable. Not so fast. The biggest fallacy according to Harrison? Old documents.

“People will bring in a lease on a piece of property from 1800. I just say, ‘Hey, it’s just a lease!’ Just because it’s old doesn’t mean it’s worth money.”

American Picker Dream, Part I: Mike Wolfe On His Love Affair With Bikes

An Inside Look at Antiques Roadshow: A Collectors Weekly Special Report'Mad Men' Prop Master Scott Buckwald Explains How He Re-Creates the '60s