Where Did All These Fembots Come From?

Today, in 1911, German activist Clara Zetkin launched the first ever International Women’s Day, to honor the political, economic, and social achievements of women worldwide. Certainly over this past century, life has improved for women by leaps and bounds—perhaps at a rate menfolk sometimes found alarming. 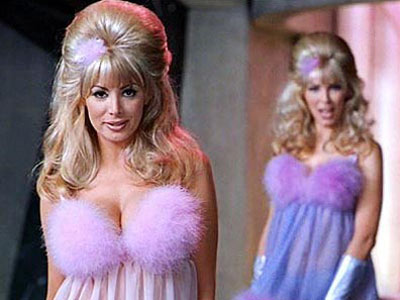 Lately, we’ve been fascinated with the American fear of robots, something both “Robopocalypse” screenwriter Daniel H. Wilson and post-war toy robot collector Justin Pinchot discussed with us.

But what happens when you put fear of women and fear of technology into the same sci-fi stew? You get “fembots,” or often-deadly robots designed to evoke the appearance and mannerisms of beautiful women.

Over at Show & Tell, electobacco posted this 12-inch cool Fembot action figure (made by Kenner, which also produced the original Star Wars action figures). Not—as some young ‘uns might guess—from the “Austin Powers” film series, but from the late 1970s TV show, “The Bionic Woman,” the female-centered cyborg spin-off of “The Six Million Dollar Man.”

Can you believe that before this show no one had come up with the catchy portmanteau of “female” and “robot”? 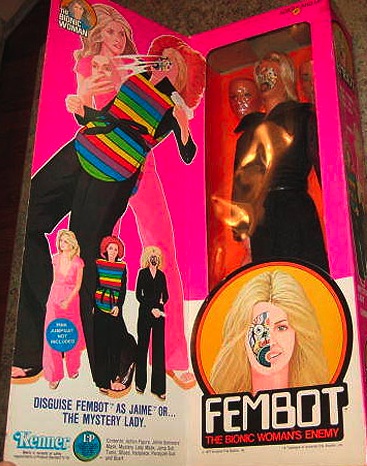 The woman-shaped faux Maria in 1927’s “Metropolis” was a “robotess,” and the proper term “gynoid” never caught on the way “android”—which originally meant man-like robot—did. “Gynoid” really isn’t that much fun to say, so I’m not shocked.

Since “The Bionic Woman,” the term “fembot” has spread like wildfire, popping up everywhere including the “Buffy the Vampire Slayer” TV show to a 2010 song by Swedish pop star Robyn, which states, “I’ve got news for you. Fembots have feelings, too.”

The original ’70s Fembots were not examples of artificial intelligence, but cold-blooded killers that could pass for humans when necessary. To make things even more confusing, some of them were men (er, male robots). Twenty years later, the scantily clad all-women Fembots in “Austin Powers” are presented as instruments of evil, life-size Barbie dolls able to render men helpless with their sex appeal, while shooting bullets from their fluffy brassieres. 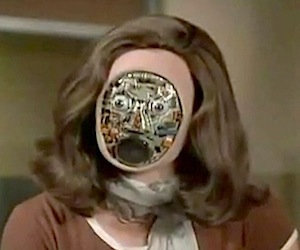 The concept of artificial women goes—as most things do—all the way back to the ancient Greeks, and it’s an obsession that seems to be growing as scientists make breakthroughs in AI and robotics in general (you saw Watson the computer beat the “Jeopardy” champs, right?).

Interestingly, though, as much as the mad-scientist men in such sci-fi stories seek to create the perfect, submissive woman (think 1975’s “Stepford Wives” and Rosie from 1962’s “The Jetsons”), something usually goes wrong and you ended up with murderous “machine-man” Maria in 1927 or “Bladerunner’s” Pris attempting to kill men with her thighs (1982) or seductive Number Six annihilating 12 planets in “Battlestar Galactica” (2004).

But here in 2011, it’s the flesh-and-blood women—with all their freewill and strength—who have come together to help topple dictators in Egypt and other countries around the world, and that’s a lack of submissiveness worth celebrating, instead of fearing.