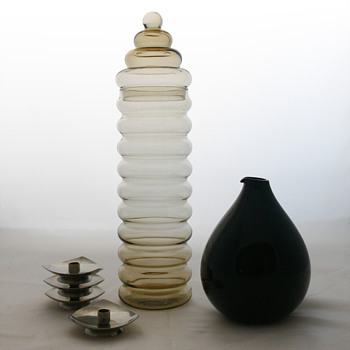 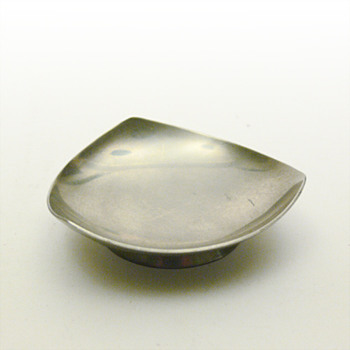 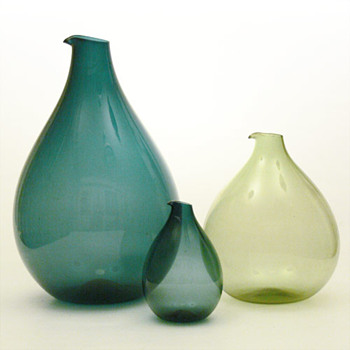 Last week i got this amazing present from a good friend... aren't they amazing???

The candleholders are Danish, made by Stelton, although i don't know who can be the designer. I have an ashtray from the same series ( http://www.collectorsweekly.com/stories/85061-another-stelton-ashtray---but-whos-th )

The glass canister is also Danish, but this time the designer is Known: Jacob Bang, for Holmegaard. It belong to the PRIMULA series, first issued in 1930 and into production until 1945. As you can imagin it was made por pasta. It's ref. No. 9518 into Holmegaard production.

The black jug is amazing!!!! It is the Blomkulla model and was designed by Kjell Blomberg for Gullaskruf. I have already got several Blomkulla jugs in blue and green, and all of them in different sizes going from 18 cm. to 42 cm. tall. ( http://www.collectorsweekly.com/stories/84424-three-blomkulla-jugs-kjell-blmberg-g )

This one is 16 cm. tall and has the same shape of the green jug (standing 26 cm. tall). A Swedish expert has told me that both shapes are valid as Blomkulla... It's a bit weird, but in any case if not the four of them, at least two are the real Blomkulla by Blomberg... as for the other two... that would rmain a mistery! :)

So, dear C., thank you soooooooooo very much for this incredible, sweet and amazing present!!!! 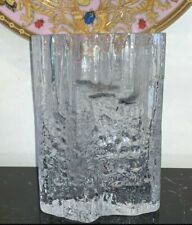