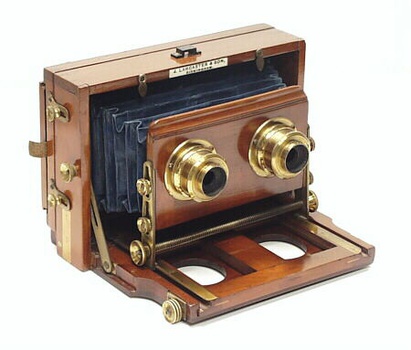 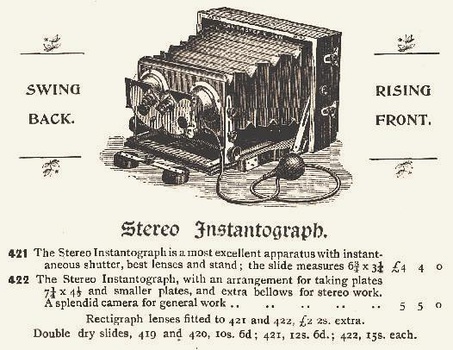 Oh my ... when British builders get down to business, their cameras are positively unequaled in terms of construction fussiness. Here is a stunning Stereo Instantograph by J. Lancaster & Son (Birmingham, England).

I grudgingly sold this camera a long time ago. A collector and good friend passed through the Midwest years back and stopped by to see my collection ... one look at the camera and he melted at the sight of the incredibly polished wood and amazingly rare blue leather bellows. The camera was literally unblemished and it amazes me to this day how it stayed in such pristine condition.

You cannot see it in the image, but English builders align all the screw heads to face in a single direction and the reinforced brass hardware (including screws) are seamlessly flush with the wood surface... how do they do that!? The photograph – unfortunately – was made at a time when digital cameras were really bad and fine details cannot be seen.

Lancaster was founded as a spectacle maker and optician in 1835 and later became involved in photographic goods around 1876 or a few years earlier. In 1882, the company introduced three series of dry-plate field cameras, the Le Merveilleux, Le Meritore, and Instantograph -- there were also stereo versions of each. The Instantograph was the most advanced of the three camera series.

Even today, the collector reminds me of his love for this camera. And I have to admit, it is missed.