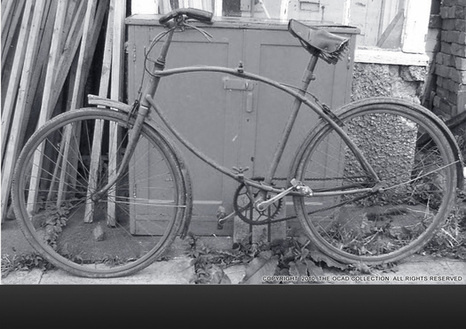 As advances in Allied equipment increased over the course of the War, the need for the Folding Paratroopers bicycle was reduced, and although they were mainly issued during the second wave of D Day landings, by Commando platoons and Canadian units, as well as in subsequence Airborne operations, the men never really took to the bicycles and their use was gradually phases out.

Like many others, this particular example saw civilian service after the war, hence why the saddle and pedals have been changed and mudguards added.

No doubt the added comfort of the larger sprung saddle compared to the original issue BSA saddle improved the ride quality. The bicycle pictured is a later model as earlier variations had a double barrel frame seat post.

Folding was a simple and quick affair, the wing-nuts were loosened and the front section of the bicycle folded around into the rear half of the frame. It could then be strapped to the front of a Paratrooper or carried. In some cases the bicycle was attached to a separate individual parachute, Jeep or armoured vehicle.

BSA, or to give it its full name, The Birmingham Small Arms Company Limited, was founded in 1861 and are most noted for their military firearms as well as motorcycles, perhaps the most iconic being the postwar BSA Gold Star and BSA Bantam models. However BSA also produced cars as well as sports firearms and bicycles. During World War Two BSA supplied a variety of armaments to the British and Common Wealth services, including the Lee Enfield .303 rifle, the Sten gun and Browning machine guns.