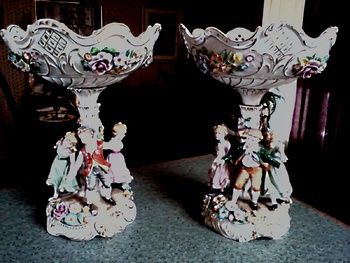 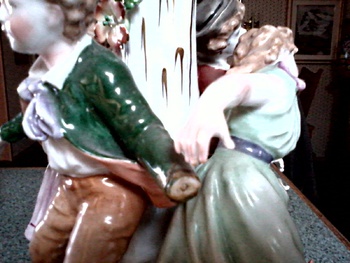 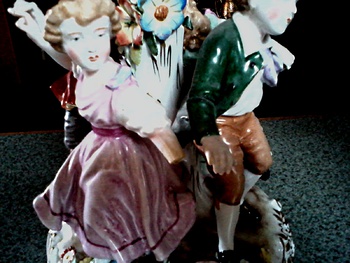 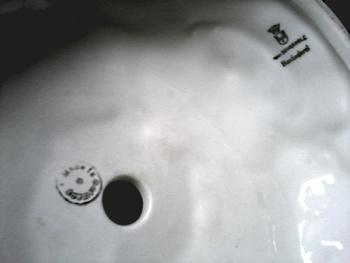 Sometimes you just "gotta have" something no matter what the cost. Definitely broke my five dollar rule ! A pair of identical (didn't want to separate them) and beautiful, although slightly damaged German Von Scheirholz porcelain compote/candelabras found at our GW this morning. Someone must have been collecting because I wanted everything in the case ! I chose these even though one figure on each piece is missing a bit of her arm and another his hand with a couple flower petal chips as well . The baskets have flowers painted inside and seem fine. They are removable leaving a spot to hold a candle. The marks on the bottom are hard to date, but from what I found online we're looking at maybe 1930-40 era. One is impressed with a "2" so they are probably a pair but the marks are a bit different. I don't know where I'll put them. They're 15" tall and the baskets are 10" in diameter. Even with the damage they are more than worth the investment. -Mike-

The Von Schierholz porcelain factory was established in 1815 in Plaue, Thuringia, East Germany. In the early days of the factory it was controlled by the sovereign, Gunther Friedrich Carl I, from his castle at Sondershausen. The concession to operate the factory was granted to Christian Gottfried Schierholz of Dornheim and was operated by his family until 1972 when it was nationalized. In 1990 the Von Schierholz family reacquired the factory which now operates under the name “Plaue”.
The factory produced high quality “Dresden” ware and is most famous for ornate Meissen-like and rococo pieces trimmed with gilt and flowers. In the early 1900’s Von Schierholz exported its finest decorative pieces worldwide, including to New York City. Von Schierholz is also known for highly collectible “character” steins - beer mugs with decorative faces, often of famous people.
Von Schierholz porcelain dates from around 1817. Since its inception, rather than focus on dinnerware, the Von Scheirholz factory has produced some of the greatest examples of porcelain vases, compotes, and figural items yet in the storied history of Meissen, Dresden, and other producers in what is now Germany. The Von Schierholz porcelain factory is still located in its original town of Plaue in Thuringia.
In 1967, the Von Schierholz Porcelain Factory celebrated its Diamond Jubilee with products having a special commemorative mark.