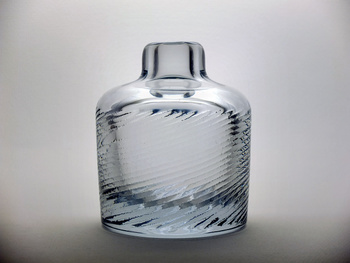 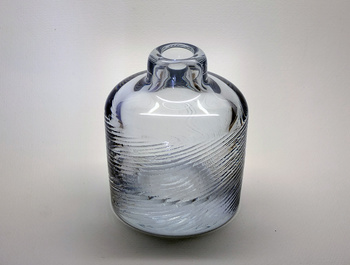 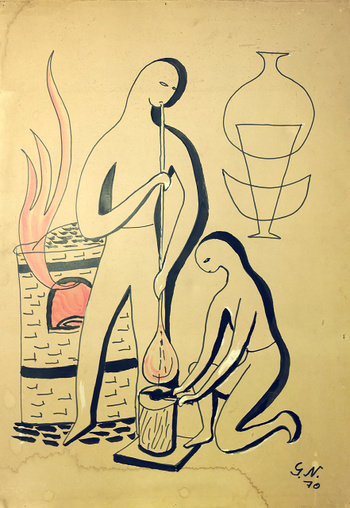 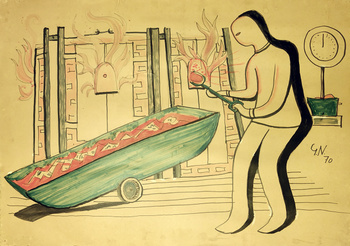 A bottle vase from Strömbergshyttan, model number B1088, I guess a design launched about 1967 - 1970 according to the B-number. I think it's pretty rare, and not so much produced? A cutted pontil mark in the bottom and the rounded mouth, tell us the vase has a free hand driven top. How the lines on the surface throughout has been made I do not know. Maybe with some tool?

I don't know who stands behind the design, but my guess is Gunnar Nylund. He designed glass on freelans for Strömbergsyttan from 1967 to some years in the beginning of 1970s. This is documented by drawings and other written documents my father took care of in 1979, when Orrefors closed down the factory in Strömbergshyttan and was going to throw away everything at the dump. Nylund also designed some bottle vases in similar forms for Rörstrand ceramics.

Among the things my father took care of when it would be thrown away, there were also two drew/painted pictures in size 70x100cm, Signed "GN 70". They shows glassblowing at the mill and how the melters in the evening fill the crucibles in the oven with fresh mixture to be melted into liquid hot glass mass. The red color comes from read lead, today forbidden. It has been replaced by barium.

Another possibility for the design is Rune Strand. He worked for Strömbergshyttan 1963-1968 and this bottle vase may as well be a design by him? In my eyes it does not look like a design by Asta Strömberg. It's a feeling I have. I had to find out more about it to say for sure who the designer can be. Some of the workers are still alive and I had to ask them about the vase.