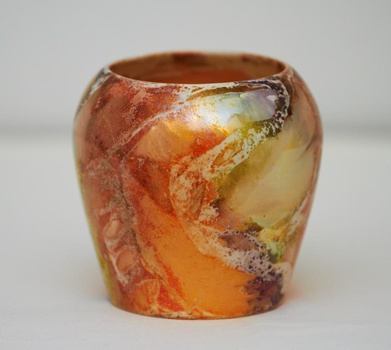 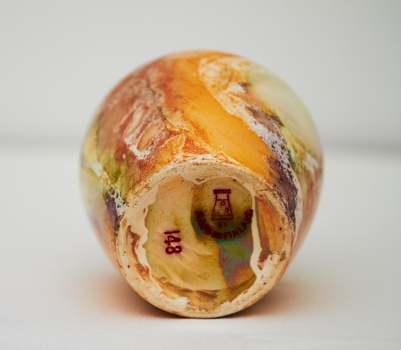 Founded in 1874, originally as a subsidiary of the Swedish Rörstrand, Arabia became an independent Finnish company in 1916, producing high-quality porcelain and stoneware to this day. The company is probably mostly known for its colorful 1960’s jam pots (the ‘Pomona’ line), the dark blue/purple ‘Valencia’ line designed by Ulla Procopé (1921-1968) in 1961 and the dark brown ‘Ruska’ also designed by Ulla Procopé (also in 1961) - apart from the more recent ‘Moomin’. The ‘Ruska’ stoneware is interesting – until relatively recently it was the kind of pottery nobody (at least here) would touch with a ten-foot pole: it was simply too brown, too 1960’s. But now, as the result of the retro wave it is suddenly fashionable again. Recently I had dinner in a very hip and trendy restaurant where coffee was served in Ruska cups!

However, in the early 20th century this characteristic type of marbled lustreware was manufactured at Arabia. I assume that they, like many others, followed the current trends and popularity of all things shiny! This vase (height 10 cm) has a very simple shape, but this type of pottery is found in a variety of shapes, sometimes with handles etc., and also in other colours such as a darker grey type and one in magenta/pink. I bought this vase from a private person for a very reasonable price – I come across this type of lustreware quite often and the prices vary a great deal.

Mark: a kiln with the letters APA in brown (the first A is illegible)), along with the number 148 and 'MADE IN FINLAND'. This mark was used by Arabia 1917-1927. It is quite easy to date Arabia pottery, thanks to the list of pottery stamps they have published on their own website: