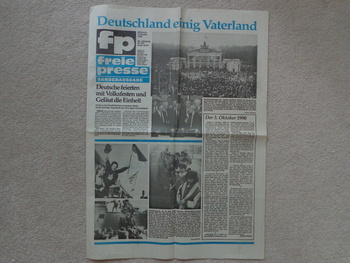 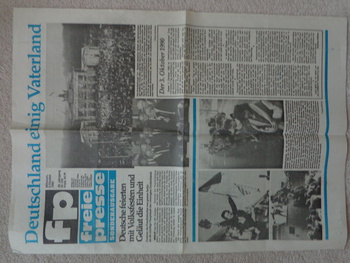 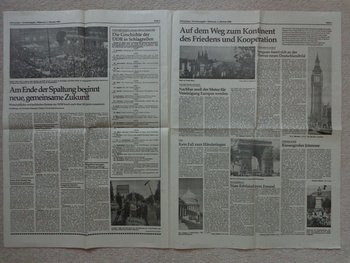 This newspaper is reporting on an event I never believed would happen: The reunification of East and West Germany/German Democratic Republic and the Federal Republic of Germany.

This event has touched many lives, including mine: I grew up in East Germany with the Wall. As a child I could never understand why people couldn't travel freely between the two Germanys. Citizens of the West were able to visit but my family in the East could never travel other than to some other communist countries on "our" side of the Iron Curtain.

When my mom had to leave her homeland after the war in 1947, she and her mom and sisters ended up in the East while all of her other relatives ended up in the West. This caused a very hurtful and damaging split of our family that happened to so many other families as well. There were a lot of "reasons" for this policy that reflected the official East German government position, and, if you knew what was good for you, you didn't question them.

One of the songs that reflected one of the personal aspects of this tragedy is a song by Udo Lindenberg titled "Maedchen von Ost-Berlin".
When I fell in love with my husband, I didn't want to be a victim of East German communist policy and, after a very, very difficult time, we managed to start a new life in Canada.

In the fall of 1989 came an unimaginable event: The fall of the Berlin Wall. I remember this event vividly even though I watched it unfolding from a save distance here in Canada. To this day it still stirs up emotions when this subject comes up.

This newspaper commemorates the unification of the two Germanys and reflects also the beginning of a long healing process for so many people suffering the consequences of this terrible part in recent history.

My mom saved this newspaper and gave it to me when I visited this June.