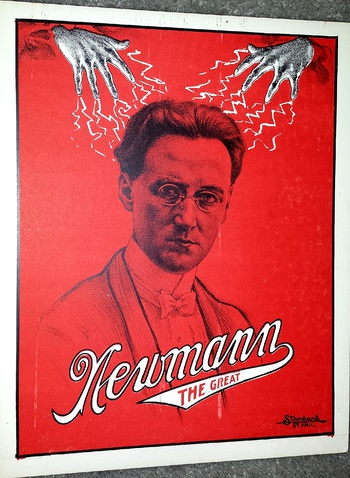 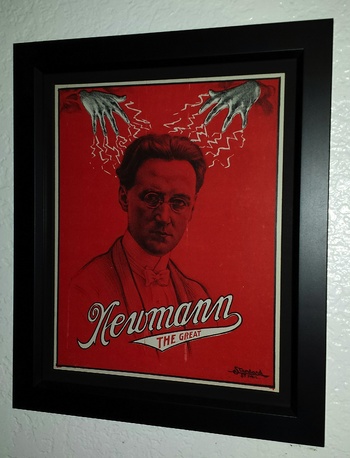 This is an original stone lithograph window card for Newmann The Great, from my private collection of Magic posters ca.1920. Printed by Standard ST. Paul.

Simply a great striking image that depicts a portrait of Newmann with electricity shooting out of two hands above his head, symbolizing his mentalist powers! This window card came from the Newmann estate.

C.A. Newmann(November 28, 1880 - December 29, 1952), also known as Newmann the Great, was a hypnotist and pioneer mentalist. Newmann was born during the pioneer days when Indian uprisings, bank robberies and highway holdups were frequent occurrences. By the age of 13, Newmann The Boy Wonder was presenting an hypnotic and mind-reading show.

For many years he limited the majority of his performances to the Northern Middle Western States, returning to the same cities year after year. For many summer seasons he gave his performances in his own tent. Newmann was primarily a mentalist who specializes in unusual, high class mental presentations, although he also presents a few illusions, such as the Levitation, The Spirit Paintings, and similar effects, in connection with his regular program. However, for over 35 years his program was composed only of Hypnotic and Mind Reading effects. He also featured the "Blindfold Drive", an amazing task that allowed him to drive an automobile to a specific destination while being blindfolded! 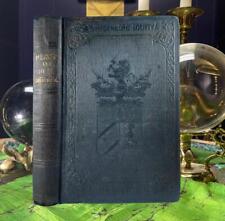 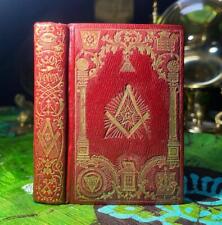 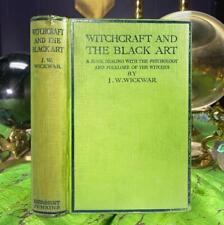 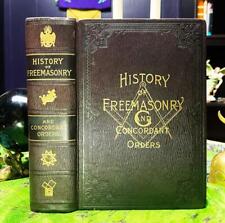