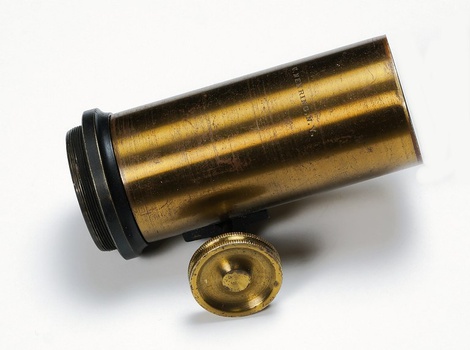 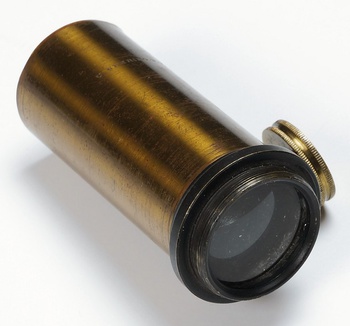 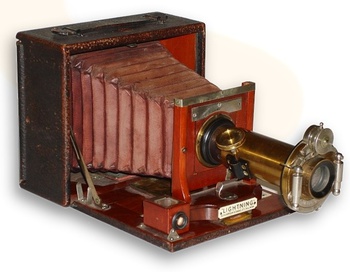 Here's another “What’s this accessory?” post. This isn’t all that difficult and those of you familiar with ‘old school’ photography have an advantage ... or maybe not.

One of the reasons for these ‘mystery’ posts is to give the collector community an appreciation of some strange and wonderful accessories that have been around since the invention of photography. Some are incredibly odd and work. Others are the equivalent of ‘snake oil.’ Anyhow, I’ve put this on a camera and it works to a certain extent.

You’re looking at a rather unusual accessory. The item is quite rare and as far as I know this is it ... no others. It’s a nicely lacquered brass tube with a lens at one end. The tangential geared knob can be turned to extend (or retract) the overall length of the tube. This should be enough to give everyone an easy starting point for guesses. (Actually, the CW crowd has proven to be pretty sharp and I expect this to be solved rather quickly.)

The key here is to figure out why this device was invented and sold. In other words, what does the dang thing do and why would a photographer be interested in this?

Clue (because you’ll ask anyhow) ... stamped into the tube is “U. Nehring. NY.” Google searches will uncover a couple patents and advertisements. In summary, you’ll learn the company makes optical accessory stuff that weren’t always proven to work.

As with my previous ‘mystery accessory’ posts, anyone who guesses correctly will have my admiration and that of your CW peers. And once this is figured out, I’ll post an image of the doohickey as it is supposed to work and explain.

Not bad ... it took only 12 hours to figure out what this accessory is and does. It was advertised as an 'ampliscope' (whatever that means). Placed between the lens/shutter and the camera body, it converts a normal lens into a poor quality telephoto. Modern versions were marketed and popular in the 1960s and 1970s as "tele-extenders".

The camera shown here is called "Lightning" (how can you not love the name). It was sold by Shuneman & Evans of St. Paul, Minn. The Nehring and camera were two separate acquisitions from a long time ago, but as you can see the accessory fits nicely.