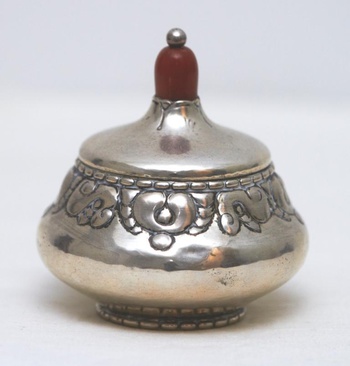 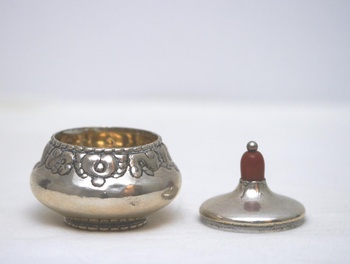 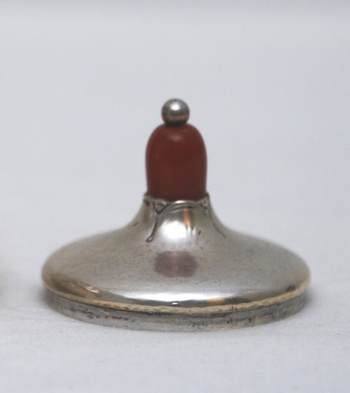 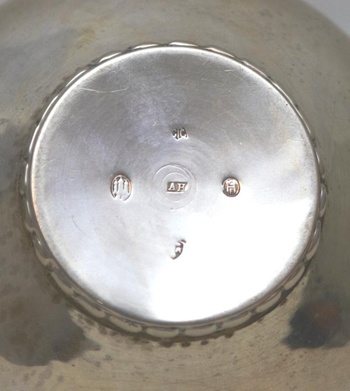 Small lidded silver bonbonnière with an amber ‘bud’ in a style very typical of ’Skoenvirke’ (1895-1915), a Danish art movement inspired by art nouveau, Jugendstil, and Arts & Crafts, with some elements of national romanticism thrown in. The rounded forms are found especially in ceramics and metalwork from this period (less so in, e.g., architecture, although there are examples). I bought this recently on an auction – actually it just ‘came along’ with another object I was more interested in, but now I am really quite happy with this pretty little thing!

Height with lid 9 cm (3.5 in), without 5 cm (2 in). The bonbonnière carries several marks: to the left the three towers, indicating silver (originally used only in Copenhagen), in the middle the letters AH, possibly the silver smith A. Halberstadt (est. 1893), and to the right the initials CFH for Christian Fr. Heise, the so-called ‘silver guardein’ (an official ‘guaranteeing’ that the object is made of silver), who was in office 1904-1932. Below the ‘AH’ half of a mark indicating ‘Danish Work’. This was used after 1908 so that a terminus post quem for it. Above the AH, a mark I can’t decipher (‘CTC’ or something like that), probably the dealer.