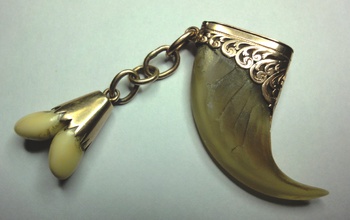 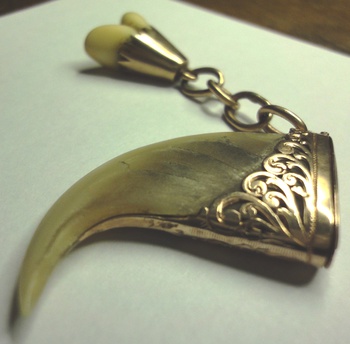 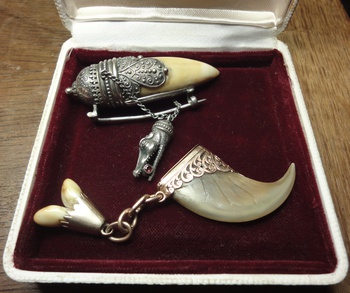 Tiger claw jewelry became popular during the British colonization of India during the Victorian period. This period was known as the British Raj (Hindi for 'rule'). The pieces were produced to appeal to the British travelers as souvenirs with an Indian flare. This craft is now banned which makes the older pieces very collectible.
Although jewelry made from animal products not to hear my favorites I fall anyway for special jewelry like this pendant.
Made of a tiger claw acid test for 9 / 14K Rose Gold combined with two Elk teeth. This pendant comes from Germany and there we often see jewelry with animal teeth . The German call this : Grandle.
What is so special on this tiger claw is that there is a lid with hinge at the top with (Essex?) Glass in it. It can open and therefore something in the pendant can be done. Probably used as Tiger Claw Vinaigrette.
The claw is hollowed and partially incased in gold. Fitted with a hinged screen inside and an equally hinged lid that hides the screen
End 19th century India, during Britain's colonial rule over India, the Raj period
It does have a small crack in the glass, but it's pretty cut and the lid functioning properly.