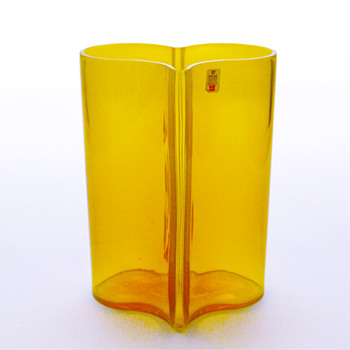 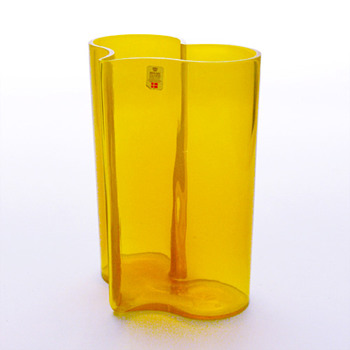 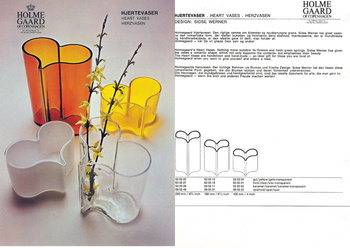 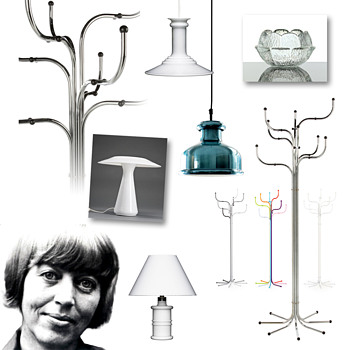 This vase is one of my favourite non-Lütken designs from Holmegaard. In fact I felt in love with it after seeing it in the Taschen book "70s decorative arts" by Charlotte and Peter Feill, and it was such great luck I found it on auction and nobody else bid for it!!! The sellers also had several Lütken items I also got... they were better times back then!!!

Its design certainly follows the path marked by Alvar Aalto in the 1930s when he created his worldwide famous Savoy vase, only it doesn't follow an abstract, poetic shape as Aalto's did, but a well know and very pop heart shape... after all it was created in 1971. The colour's pretty pop too.

It was made in three different sizes -this one being the tallest of them- and in four colours: yellow, brown, clear and white/opaline -see pic.3-.

Sidse Werner is famous for designing an impressive coatrack -see pic.4- and in fact she was a designer more than a glass designer. Her work for Holmegaard shows a perhaps erratic path at the begining, although she designed some great series such as this Hjertevas, the Regiment range and some nice textured glass bowls and votives, and let's not forget the Troldglas range, inspired by Lütken's LAVA series. But she later especialized in lamps, and she designed some great ones!