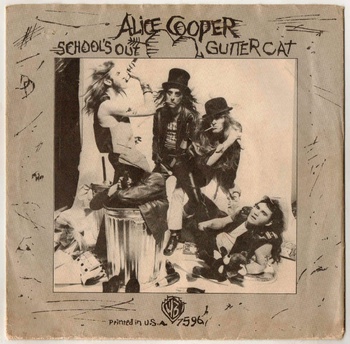 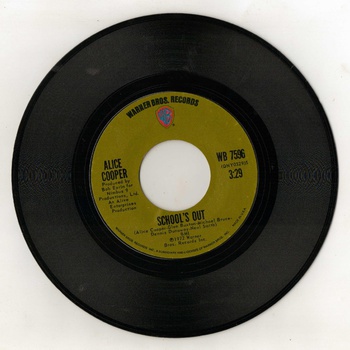 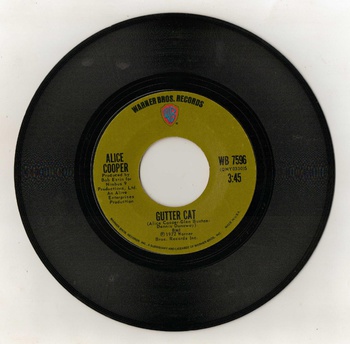 This is a 45rpm in its original sleeve released in 1972 by Warner Brothers and BMI of Alice Cooper / (1972) - Warner Bros. Records #WB-7596
- Side A - "Schools Out" / Side B - "Gutter Cat"
*** Alice Cooper (born Vincent Damon Furnier) is an American rock singer, songwriter, and musician whose career spans five decades. With a stage show that features guillotines, electric chairs, fake blood, boa constrictors, baby dolls, crutch and dueling sword, considered by fans and peers alike to be "The Godfather of Shock Rock"; Cooper has drawn equally from horror movies, vaudeville, and garage rock to pioneer a grandly theatrical and macabre brand of rock designed to shock. The original Alice Cooper band broke into the international music mainstream with the 1971 hit "I'm Eighteen" from the album Love It to Death, which was followed by the even bigger single "School's Out" in 1972. The band reached their peak with the 1973 album Billion Dollar Babies. Cooper is currently a film actor, a golfing celebrity, a restaurateur and, since 2004, a popular radio DJ with his classic rock show Nights with Alice Cooper.
In 2011, the original Alice Cooper band was inducted into the Rock and Roll Hall of Fame.