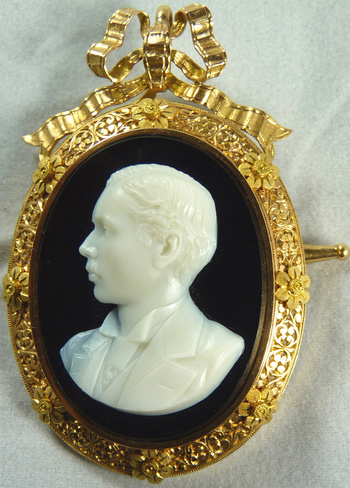 Some recent posts by Bluboi reminded me just how fascinating historical jewels can be. If Bluboi is who I think she is then we're seeing pieces from an extraordinary collection by someone who has devoted a huge amount of time to curating wonderful jewels on the web for the benefit of us all.

So I've reached into the back of the Tardis for an historical piece or two. I'm a treasure hunter and sleeper hunter, and this one was one of my better finds, because it passed through a prominent local auction house and dealer without anyone noticing the obvious and flamboyantly scratched "PL" signature on the back.

Paul-Victor LEBAS was a prominent C19th cameo sculptor in Paris, at 19 Rue Guenegaud. He was active 1851-1876. Lebas exhibited at the Paris Salons and worked with the jewellers Caillot & Peck, specialists in cameo settings. His best known works are the cameo portraits of the young Queen Victoria (now in the V&A, see: http://www.vam.ac.uk/users/node/4981) and Napoleon III's son (now in the Met, see: http://metmuseum.org/collection/the-collection-online/search/198597).

This is a hardstone cameo portrait of the young Alexander III of Russia, completed circa 1866-7, and probably based on images from a couple of years earlier when he was aged about 19, long before he became Tsar in 1881.