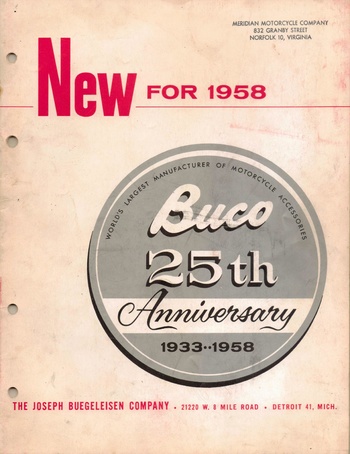 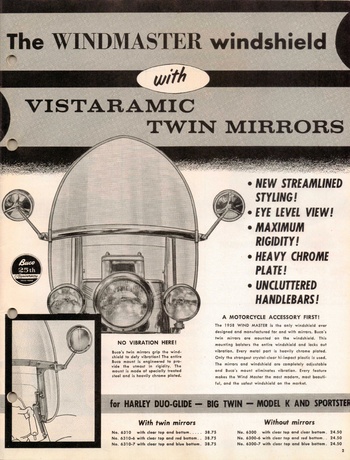 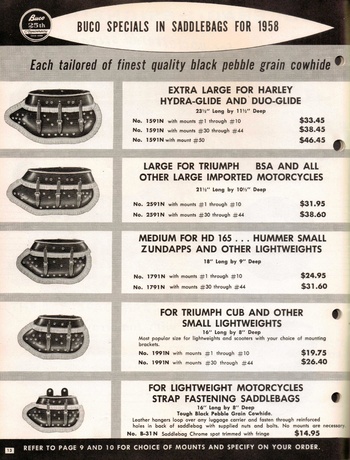 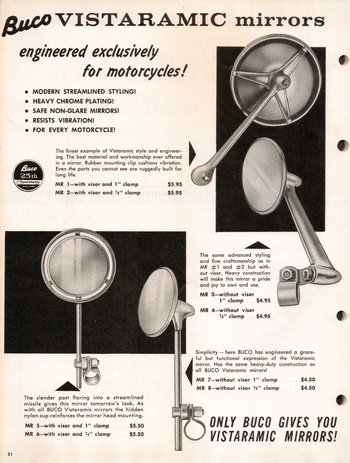 This is a 1958 (25th Anniversary) edition of the Joseph Buegeleisen Co. Motorcycle Accessories Catalog. The catalog is only 34 pages long, staple bound, and holed to fit a binder. (stamped on cover with Virginia dealer)
** The Buegeleisen Company came about from the famous Resistal aviator goggles which were manufactured by Strauss & Buegeleisen (Joseph's brother Elias). Joseph moved to Detroit as a regional salesman for Resistal around 1930. His experience selling goggles to aviators, motorcyclists and motorists must have given Buegeleisen unique insight into the specialized needs of these groups and in 1933 he founded his own company based in Detroit and named it Buegeleisen Company.
The simplification of "Buegeleisen Company", "Buco" was first used in 1940. Known for their leather jackets, Buco was also the countries largest manufacturers and distributor of motorcycle accessories. In 1966, at the peak of their production, Joseph Buegeleisen sold the company to the American Safety Equipment Corporation of New York. - Production of jackets under American Safety's ownership was outsourced to Japan, Spain and England, however former employees went on to start Beck leather jackets, also based in Detroit.