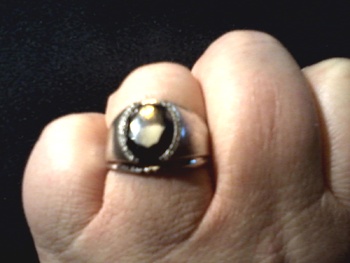 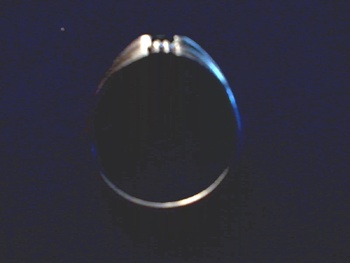 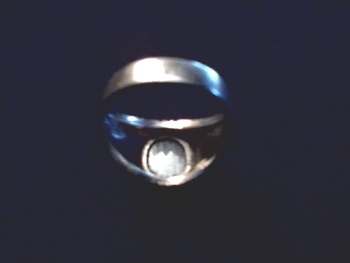 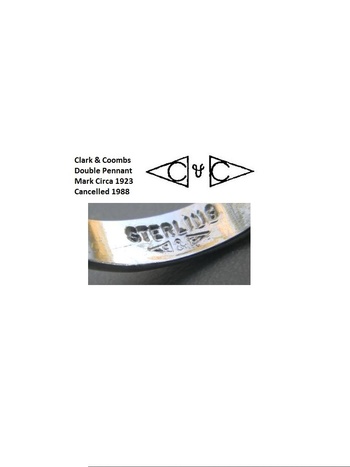 I stopped at Volunteer's of America today as usual and noticed some really nice rings in the case. I asked to see the tray and looked at the prices and a few of them were well over a hundred dollars. The clerk told me they had separated the costume from the gold and silver rings and I was looking at the expensive stuff. There were no bargains to be had here, but then I tried this ring on and it fit perfectly. Something that almost never happens. At first I thought it was onyx but it was too metallic looking on the surface. Then I remembered hematite which is really a mineral but used in a lot of men's jewelry. The men's intaglio rings with the Roman heads are a good example of another use of hematite. This is a nice cushion cut which is hard to see in a black stone. The facets are just around the edges with a smooth top surface. This one carries Clark and Coombs double pennant mark and "sterling" stamped into the band. These are hard to date but mid-century seems about right judging by the design. I really have very little men's jewelry aside from a few cuff links and tie tacks. Mostly women's costume and silver. Truth be told I don't like wearing jewelry, but I think I can wear this at least sometime. If the ring fits wear it ! -Mike-

Clark & Coombs which was established in 1872.Started out as a burnisher and finisher for a large silver compnay in North Attleboro Mass. Upon moving to Providence R.I. it built a national reputation for manufacturing gold and silver rings by the early twentieth century. By mid-century, however, production had dropped sharply due to antiquated machinery and inefficient management practices. In 1946 the business reorganized, and under the management of a new president and veteran jewelry manufacturer, Vita Cameglia, Clark & Coombs increased production by 100 percent within a seven-year period. The company further expanded after the purchase of jewelry tools and dies from the Ostby &. Barton Company.

The Metaphysical
Courtesy of Livestrong

The mineral hematite is said to bring inner peace and dissolve negative energy into love and relieve stress.This powerful grayish black stone has been used for centuries as an alternative form of healing. It's history dates back to ancient Egypt when the stone was used to stop blood flow and remove poisons from the body.
.....and boy do I need it !! -Mike-