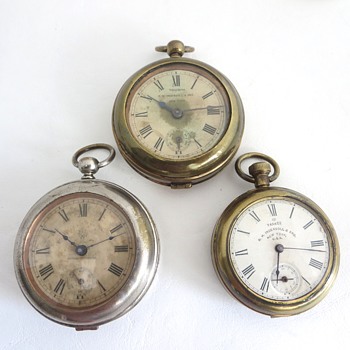 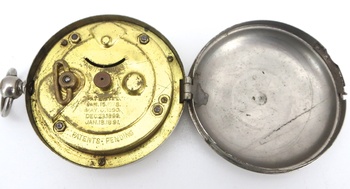 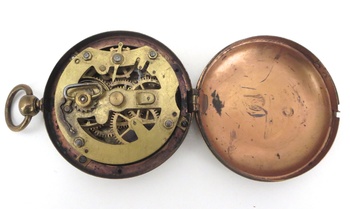 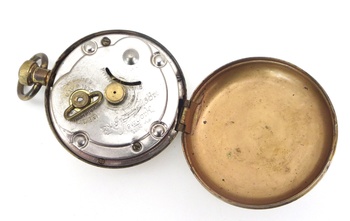 In 1879, a young Robert H. Ingersoll, at the age of 19, left his father’s farm near Lansing, Michigan and went to New York to seek his fortune. Other than the farming skills gained on his father’s farm he was without technical training, but he had a vision of what common people wanted. After finding employment and able to stash away $160.00, he decided to become an entrepreneur and started his own business in the manufacturing and selling of rubber stamps. Soon he sent for his brother Charles H. to join him in his new enterprise. His brother, who tinkered in inventions, devised a toy typewriter, which attained a considerable sale as a dollar article. This was followed by a patented pencil, a dollar sewing-machine, a patent key-ring & various other novelties. They soon found themselves with an embryo manufacturing and wholesale jobbing business. Their next development was that of a mail-order department. Their catalog was published in millions of copies. Next they developed the chain-store idea with a specialty store in New York followed by six other outlets. Expanding their inventory, they soon found themselves among the largest wholesale and retail dealers in the country.
One day, Robert H. noticed a small Ansonia “Bee” clock in his boarding-house room that he had seen a hundred times not giving it any thought beyond checking the time, but this time, it suddenly ceased to be a clock and opened a door into the future. What if this clock could be reduced in size, one that could be put into a pocket and be affordable by the common man. Soon he discovered that the New Haven and the Waterbury Clock Companies had already produced these types of inexpensive “clock-watches”. Neither of these companies had achieved mass-market success or widespread distribution. In 1892 he placed an order with the Waterbury Clock Company to purchase 1,000 of these “clock-watches” at a cost of $0.85 apiece to be offered in their 1892 Ingersoll mail-order catalog at a price of $1.00. They were a success and soon he placed an order for 10,000 more. This was the beginning of the R. H. Ingersoll & Bro. watch, “The Watch That Made The Dollar Famous”.
Manufacturing was carried out by contract with the Waterbury Clock Co. and at two new factories owned by Ingersoll at Waterbury & Trenton, New Jersey. The Ingersoll Co. is credited with perfecting the mail-order & retail business with uniform pricing throughout. By 1899 their production was 8.000 watches per day and in 1901 they advertised that their watches were sold for $1.00 by 10,000 dealers across the USA and Canada. Their slogan was “The Watch That Made The Dollar Famous”.
In 1908 they purchased the Trenton Watch Co. and in 1914 the New England Watch Company. In 1917 they introduced the “Reliance” a higher-grade and not considered a dollar watch because it was a jeweled movement manufactured in the Trenton plant they purchased. In 1919 they introduced the “Radiolite” with a luminous radium dial. (both of these will be shown in a separate post).
In 1921 during the post WWI recession, Ingersoll declared bankruptcy and in 1922 was purchased by the Waterbury Watch Company (different from the Waterbury Clock Co,) for approximately 1.5 Million Dollars. In 1942 the Waterbury Watch Co. was purchased by the U.S. Time Corp., which continued to use the Ingersoll name.

Shown here is three of the early “back-wind & set” clock watches with paper dials, sold through their mail-order catalog business.
On the left is a 35-size clock-watch with the case measuring 2.5 inches across and 1.12 inches thick. The dial is marked with the Waterbury Clock Co. logo under the 12:00 position and WATERBURY CLOCK CO. below the hour/minute hand post. The back movement cover is marked:
PATENTED
JAN. 15. 1878
MAY 6. 1890
DEC. 23. 1890
JAN. 13. 1891
PATENTS PENDING

The center one is similar in size with the case measuring 2.5 inches across and 0.94 inch thick.
The dial is marked:
TRIUMPH
R.H. INGERSOLL & BRO.
NEW YORK
The back cover is removed showing the clock-watch works.