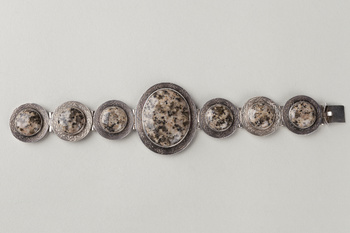 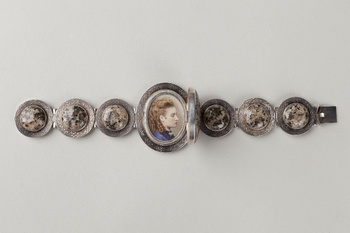 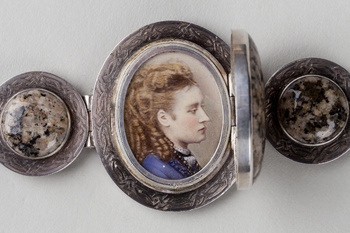 The granite bracelet was presented to Jane Hope (née Hope-Vere), Marchioness of Ely to mark the engagement of Queen Victoria's youngest daughter, Princess Louise to Lord Lorne. The engagement took place during a walk, on which the Marchioness was acting as the Princess' chaperone, on the Balmoral Estate. Queen Victoria's diary recalls: 'This was an eventful day! Our dear Louise was engaged to Lord Lorne. The event took place during a walk from Glassalt Shiel to the Dhu Loch. She had gone there with Janie Ely, the Lord Chancellor, and Lorne’.

The bracelet was commissioned to mark the event and is inscribed “To the Marchioness of Ely in recollection of the Dhu Loch 3rd October 1870 from Victoria R”.

The bracelet comprises six polished circular granite stones of approximately 1.5cm in diameter set three either side of a central large oval cabochon stone almost 3cm in diameter. These are mounted in silver linked discs which feature intricate Celtic ropework detail to complement the stones. The central stone can be opened at the front, in the form of a locket, to reveal a hand coloured miniature photograph of Princess Louise. It is a copy of the official engagement photo taken by W and D Downey in 1870 of Louise and the Marquess of Lorne. The back is inscribed M. Rettie and Sons Aberdeen.

The jeweller Middleton Rettie established his business at Aberdeen in 1824. The business became styled as M. Rettie & Son (c.1839) when William Rettie joined the firm, and later another son, James, also became a partner (c.1845). Rettie and Son worked between 1824 and 1892 and were well known for their jewellery using the local granite.