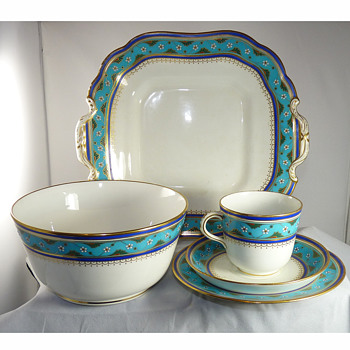 This is a sample of pieces from a Minton Cloisonne Ware tea and coffee set designed by Christopher Dresser.

Because of the harlequin dates I'm assuming this was a trousseau set, maybe gifted piece-by-piece by family or godparents on successive Christmases and birthdays until the set was complete.

The story of how I acquired this set is rather extraordinary. Back in the early 2000's when antiques were going ballistic, there was quite a craze for Christopher Dresser, accelerated by his forthcoming 100 year anniversary in 2004, with major exhibitions at the V&A and the Met.

One day I walked into a country dealers and saw pieces from this set scattered around on the furniture. I asked to buy, but the dealers were adamant they were for "display only" and NFS, however clearly they had no idea what they were. Each time I visited every couple of months I expressed mild interest, but still they were NFS.

A year later I visited and HEY! The dealers were divorcing and everything "Had to GO!" I bought the set, Hallelujah! It consisted of about 20 pieces. I was in heaven!

It was over six months later when I next revisited, and was warmly welcomed with much apology. The owners were so sorry, they had forgotten to give me the rest of the set, which had been packed away in the storeroom.

Despite my protestations I was not allowed to pay any more money, and walked out with another box full of Christopher Dresser Minton Cloisonne Ware, walking on air.