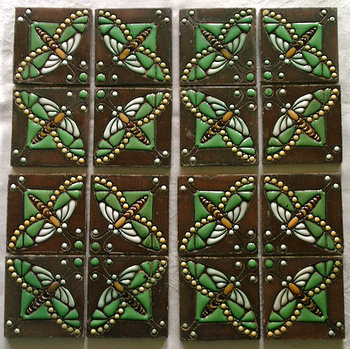 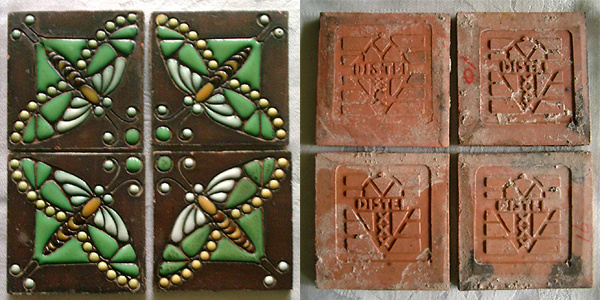 A rare set of 16 De Distel Dragonfly (Libelle) Carduus Tiles designed by Jan Eisenloeffel circa 1905. Each tile is 75mm square, and four tiles together make a panel, so this is 4 panels totaling 16 tiles.

Jan Eisenloeffel was the leading Dutch jeweller and metal worker of the Art Nouveau and Arts & Crafts movements, (Nieuwe Kunst movement in Holland). After training in enamelling and engraving with Faberge in St Petersburg he set up his own business, De Woning in Amsterdam in 1903, and provided a few external designs to De Distel.

Plateelbakkerij De Distel operated 1895-1923, then merged with Goedewaagen (Gouda). They were an Art Pottery with limited production to a very high standard. Their signature production from the early 1900's was the unique tile product called 'Carduus', which is the Latin name for Thistle, referring to the factory name of Distel, (Dutch for thistle).

The brick coloured tiles were covered with a thin metallic copper coloured glaze. The lines of the pattern were impressed into the surface and the design was filled in with glazes in white, yellow, green or orange. This produced a jewel-like effect similar to cloisonne.

The designs were often geometrical or naturalistic themes such as flower or insect motifs. These were applied to either single tiles, or panels made up of multiple tiles. Among the leading artists who created these tile designs were Jan Eisenloeffel, Bert Nienhuis, and W.H. van Norden.

As far as I know this dragonfly pattern was Eienloeffel's only tile design.

I try not to have regrets about the ones that got away, however I will always kick myself for releasing these into the wilds of eBay at the depths of the (GFC) recession, the miserable couple of hundred Euro I got was a pittance, and the Dutch buyer was ecstatic.