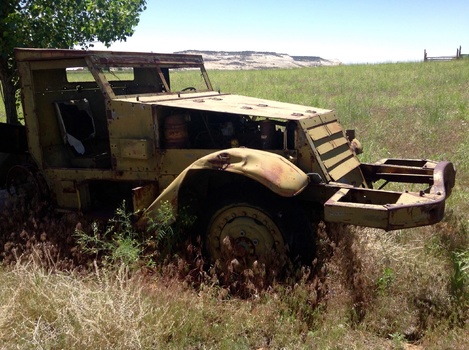 After we bought our cool Half Track for the aaaLakeside Storage Museum, we decided to look for some "parts machines" to try and make our machine more complete. In asking around I was able to find a few stories of machines that had broken down many years ago and were just sitting out in the wild. A couple of Saturday's ago my wife and I decided to go for a "ride" and see if we could "fill in the gaps" of a story we heard from a Sign/Pump collector in Nevada. His story was about his "recent" visit to the backwoods of Utah and sounded promising. The ride eventually took us to two National Parks along the way and ended in about 550 miles on the truck, but was eventually eventful as we finally did locate this old 1942 White Half Track just as it had been described. The Fun was, once more, in the Hunt. The good company was a lot of fun as well.