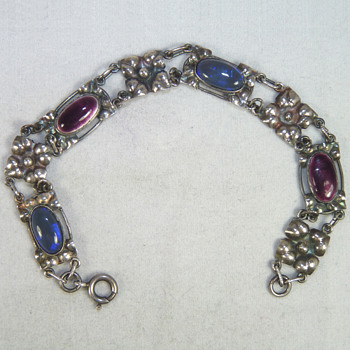 She was born in Melbourne, Australia, and studied at the School of Art at the Regent Street Polytechnic Institute in London. She won the school's highest honour for design, a silver medal and one year scholarship, which she used to acquire metalworking skills, including enamelling.

In 1909 she travelled to New Zealand with her parents. Her father was a dentist, who set up practice in Wellington, where Elsie established a studio as an "artist in enamels" making mainly enamel brooches and pendants.

From 1914 to 1922 Elsie returned to London and worked for the Admiralty during WWI. By 1922 she was back in New Zealand and set up business in Auckland as an "art worker" making "hand-wrought" jewellery. Her work was of a high standard, and she exhibited widely, including at the New Zealand and South Seas International Exhibition held in Dunedin in 1925.

From a young age Elsie Reeve suffered from fibrosis of the lungs, and in 1927, aged just 42, she died from complications of the disease.

There's very little known about Elsie Reeve's influences, however one of her signature styles is a design of grapes and leaves very similar to pieces by the Artificers' Guild, whose showroom was near Elsie's school at the Regent Street Polytechnic.

The silver bracelet shown above has Elsie's very distinctive purple enamelling on panels which alternate with black opal cabochons, shot through with streaks of blue. It’s a most effective design and the only piece I've ever heard of by Elsie Reeve that uses opal.