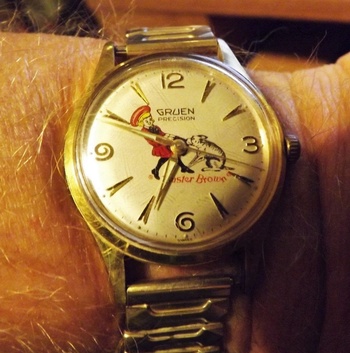 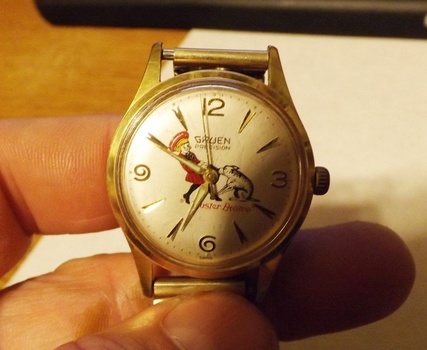 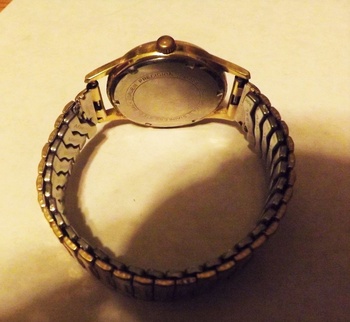 Hello Fellow Collectors. Here a few months ago, I stated I would try and post just those certain watches and clocks, that you might not get to see anywhere else. For the most part, I've held to that notion and this posting is no exception to what I've set out to do.
Buster Brown Shoes have had several watches produced for them over the years. The earliest models were pocket watches produced to promote sales. These early models appeared in 1908 and have been around ever since. I have a few of the earlier variants dating from 1910, 20's & 30's in pocket watch form, but that's another story, I'll save for later. I also have several wristwatch variant with various production dates.... And fellow CW patron "eye4beauty" has an excellent example of a 1971 Buster & Tige posted.
But back to this posting... This watch is a 17 Jewel Gruen "Precision" Swiss made mechanical timepiece with a full depiction of Buster & Tige playing on the dial. This example was not marketed for children in mind, like so many "Character/Advertisement" watches were. As far as I know, I don't believe they were marketed at all, but probably a "Corporate" watch for select individuals. Just found an interesting site on dating a Gruen wristwatch, using the style #, so with that the style # 710 makes this a 1950 model and uses a 3351 caliber movement. No more guessing, This is circa 1950!!
Thanks for looking and if you have another one of these...I'd love to see yours.
Have a Great Day
Kerry

Note to Staff: The Gruen Watch Company was formerly one of the largest watch manufacturers in the United States. It was in business from about 1894 to 1958 and was based in Cincinnati, Ohio.
Why isn't there a "Sub-Category"