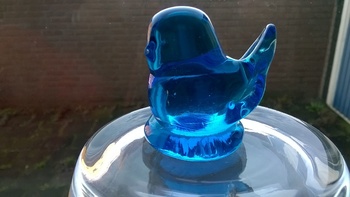 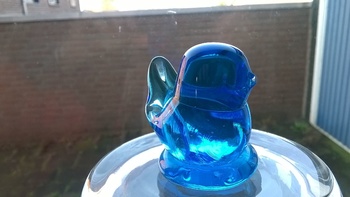 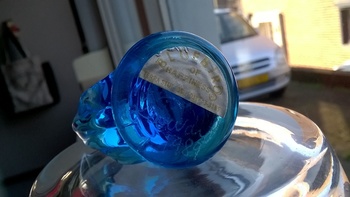 Signed by artist Leo Ward. These sweet birds are still made today and come in a variety of colors.

The original Arkansas Bluebird of Happiness was created by Leo Ward at Terra Studios near Durham (Washington County). Since their introduction in 1982, over nine million bluebirds have been sold. Each bird is individually crafted from molten glass by artisans at Terra Studios and is signed and dated. Though Terra Studios creates glass birds in many colors, the bluebird has always been the most popular choice.

While living in San Diego, California, in the early 1970s, Leo Ward discovered a passion for glass blowing. Along with his wife, Rita, Ward opened a gift shop and constructed a glass furnace on the premises. When a city inspector discovered this furnace, the shop was closed, and the Wards moved to Arkansas, where Rita’s parents had retired.

In 1975, the Wards purchased ten acres of land near Durham and slowly began to establish themselves as artists. One of Ward’s creations was a little glass bird, which he began selling at the War Eagle Craft Fair in 1982. When Ward placed an advertisement for these birds in a regional magazine, The Ozarks Mountaineer, a salesman suggested the name Bluebird of Happiness.

After Ward’s bluebirds became a regional success, Rita urged him to sell the birds at hospital gift shops and was instrumental in starting a wholesale business. The Original Bluebird of Happiness is a registered trademark, and the birds have been sold at 8,000 gift stores nationwide. The bluebirds are also sold internationally and have been shipped as far away as Australia and Japan. Each bluebird is individually crafted at Terra Studios, and it has sometimes taken as many as twenty glass artisans to keep up with the demand.

The enormous popularity of Ward’s bluebirds has fueled the creativity of many artists in northwest Arkansas. Over the years, Terra Studios has grown into a 160-acre showcase of artwork created by hundreds of artists who have worked or taken classes there. Ward retired in 2006. The bluebird business is now being managed by his son John."