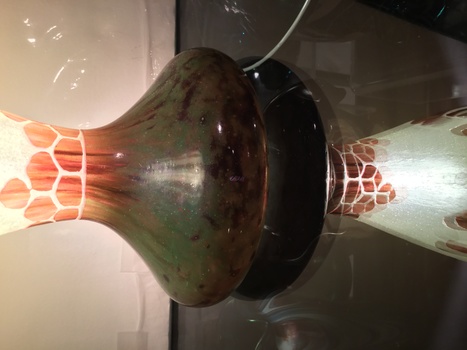 Monumental Le Verre Francais (LVF) vase. 19 1/8"h.Charles Schneider Glassworks, Épinay-sur-Seine, France, circa 1920. The yellow glass baluster vase with green and red overlay in the Gui pattern. Ref.: p. 89, Joulin and Maier, 2004, (similar).
LVF cameo glass was a separate line of art glass designed by Charles Schneider. Production duration parallels that of the glass signed Schneider, i.e.1918 –1933, and both lines had a common beginning where crossovers occurred. There are early cameo pieces signed Schneider and conversely, some cased glass bears the candy cane signature. But starting in about 1919 some far-reaching business decisions were apparently made, because from then on the two lines were kept strictly apart, to the point of even having separate sales locations in Paris.
Several different signatures were used for LVF glass. Early marks (1918-1922) consist of a small tri-color glass rod, (berlingot) a patriotic touch representing the red-white-blue French flag, which was fused into the foot or bottom of the piece. Rather than straight, it can also appear as a tight curl. This signature is commonly referred to as a ‘candy cane’.