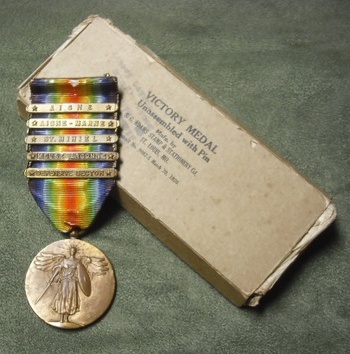 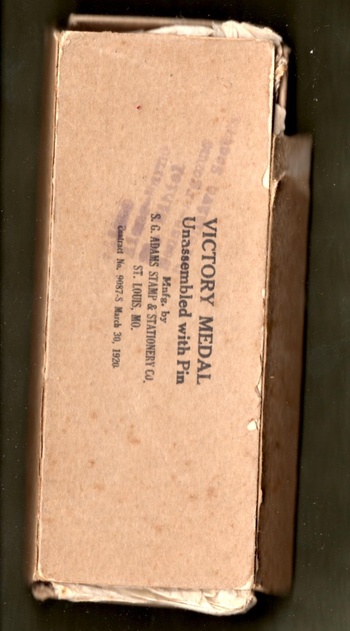 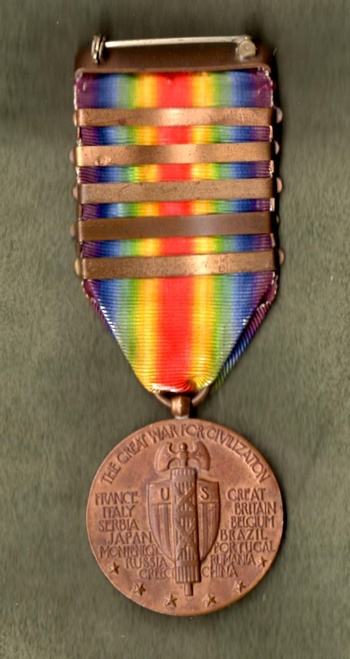 I actually showed this medal when I did my posts last year covering victory medals for each of the US Divisions. Because I focused on each medal representing a division, I didn’t want to further complicate the matter by adding any boxes I had.

The box is marked “S.G. Adams Stamp and Stationary Co.”, one of the three contractors producing this medal for the US Government on its original contract in March 1920. Yes, it took from the end of the war until 1920 to conceptualize, approve, design and contract production of this medal.

Although it says “Unassembled with Pin,” the medals were only shipped that way to the Philadelphia Quartermaster Depot. There the veteran’s information was reviewed and the medal was completely assembled with the authorized clasps. It was then put back in the box with a slip of paper from the approving officer. After that, the box was stamped with the names of the attached clasps and put in a slightly larger box which was addressed and shipped to the recipient.

This box has been crushed, and the addressed outer shipping box and approving officer’s slip is missing. It does have the paper that the medal was wrapped in. The medal has some wear and dings as well, but the clasps do match the stamps on the box.

Although clasps were based on an individual soldier’s participation in a battle, this particular medal has clasps that reflect participation consistent with a soldier who had served in the Second Division for the duration of the war. Beyond that there really isn’t a way of knowing.