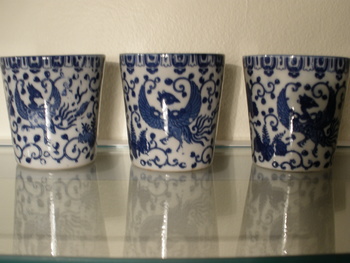 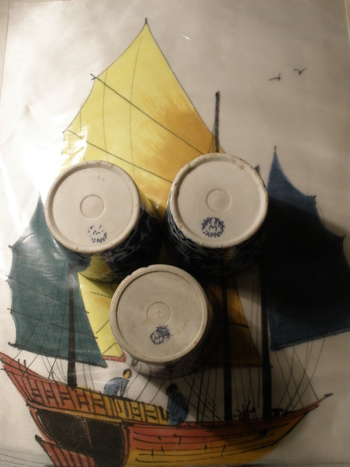 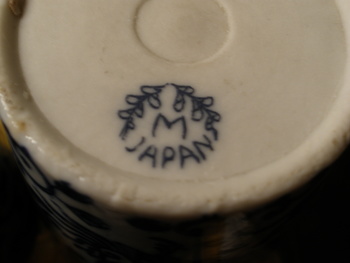 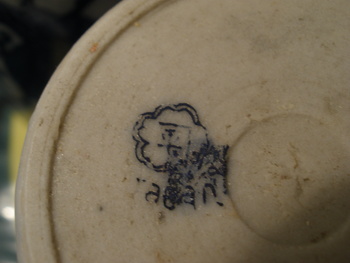 Well out came the cart at GW today and I had some competition. A lady grabbed a blue and white ginger jar and I grabbed these 3 cups. I just stood there as she peeled the price tag off where they always put it....right over the makers mark. Any mark I asked. "Nope, but I like it she said". I looked at my cups and they where marked with some relief. I noticed none of the 3 turkeys where painted the same at first, and had different marks on the bottoms. The 2 on the left in first pic are marked Morimura brothers (1921-1953), but I think these are an early 20's-30's marks judging by the wreaths and marked only Japan. The rightmost cups mark is a bit of a puzzle. It looks like a double drawn Noritake cherry blossom mark with another mark inside it, and possibly another mark beside it obscuring everything. (There seems to be some debate regarding the Morimura bros.being Noritake predecessors. Maybe this cup has something to reveal regarding that). Below it reads Japan with lower cased a's. Funny the 2 would be together with the oddball, and I assume someone would have bought them on separate occasions bringing the 3 together. The Morimura ones are badly out of round on the lip, almost egg shaped, and the Noritake is perfectly round.