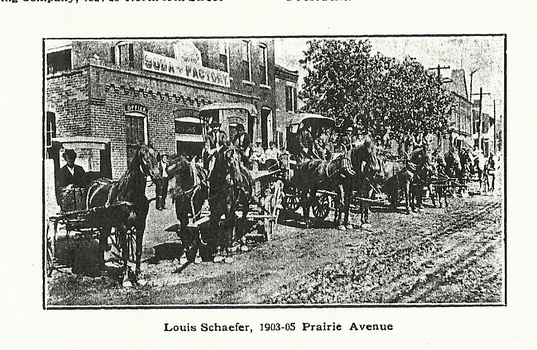 Louis Schafer soda bottle. Louis Schafer (his name I have seen in newspaper articles is often misspelled Schaefer) had a bottling operation at 1903-1905 Prarie Street in St. Louis, Missouri. He was in business from 1895 to 1913. City directories had his establishment list as:
West End Soda Water Factory, West End Soda Factory, West End Soda Co. & Louis Shafer over the time span of 1895 to 1913. This bottle I am guessing to be around the early 1900's.
I purchased a copy of the West End Soda Factory picture from the Missouri History Museum and is dated around 1908.
The second bottle is a E.H. Giessow bottle dating between 1914 & 1918.
Louis Schafer had two sons Walter & William. Edward H. Giessow had his plant at the same location 1903-1905 Prarie Street and Walter was listed as the superintendent of the plant. City directories show him in business from 1914 to 1918.