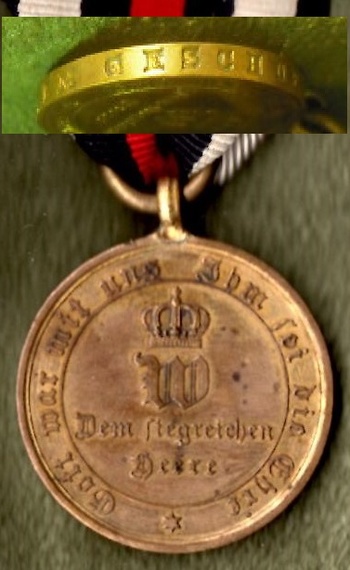 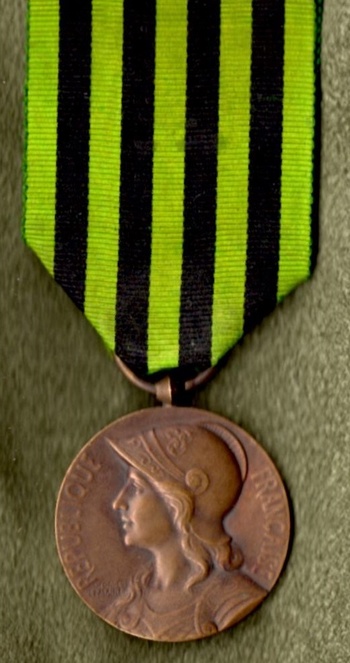 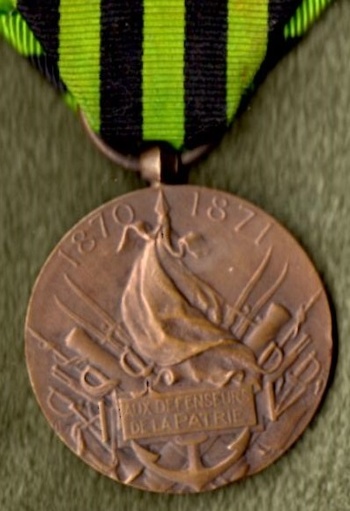 In 1870, The Franco-Prussian War erupted between the 2nd French Empire, led by Napoleon III, and a Germanic coalition dominated by Prussia and the indomitable Otto von Bismarck. While the war was ostensibly about succession to the Spanish throne and predicated upon by a carefully engineered and exploited diplomatic insult, it was really about a shift of power in Europe and the consolidation of the various German states into a German Empire. In the end, the Germans were able to mobilize, maneuver and strike faster, leading to a humiliating defeat for the French.

The German War Commemorative Medal of 1870-71 was created in May of 1871, about two months after the war. They were awarded to soldiers, sailors, doctors and civil servants who took part in the war. Bronze medals like this were for combatants, and steel versions were for non-combatants.

The edge of the bronze medal is stamped “AUS EROBERTEM GESCHUETZ” (From conquered cannon). The front features the royal cypher of Wilhelm I over the inscription “Dem siegreichen Heere” (To the victorious army). Inscribed around the edge is “Gott war mit uns, Ihm sei die Ehre” (God was with us, to Him be the glory). The reverse shows a cross pattée with rays between the four arms. In the center of the cross is a laurel wreath surrounding the years 1870 and 1871.

The French Commemorative medal of the 1870–1871 War was not created until 1911. This may seem odd, but it does seem to happen that the losing side takes longer to create service medals. Perhaps the bitterness of defeat must eventually become a sort of nostalgia about bravery and sacrifice before a medal can be made to commemorate it. It was awarded to soldiers and sailors who served in France, Algeria, or on armed naval vessels during the war, as well as mobilized police, forestry, guards and customs personnel.

The French medal is also in bronze. The front bears a helmeted female effigy representing France at war, and the words "REPUBLIQUE FRANCAISE" (French Republic). The reverse has a plaque bearing the words "AUX DEFENSEURS DE LA PATRIE" (To the nation’s defenders) over a trophy of arms, an anchor and a flag. At the top are the years 1870 and 1871.

We're really really sorry, Collectors Weekly has had a bad fatal error. We've been alerted about it and will fix it ASAP.