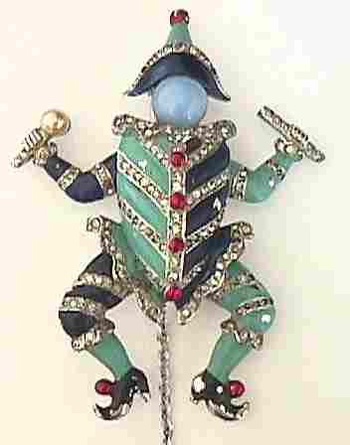 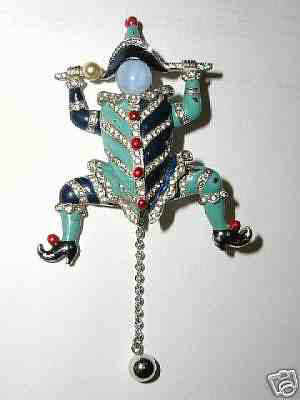 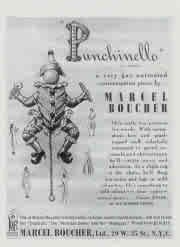 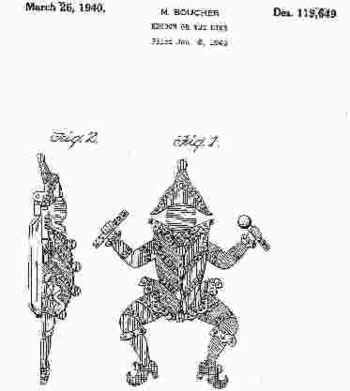 This is the story behind Marcel Boucher's fur clip, called "Punchinello", which, as you can see from the 4th image above, was filed with the UP Patent Office in 1940. Punchinello is based upon an old fairy tale, o children's story, written by Max Lucado. The story goes like this:

Punchinello thinks himself imperfect, because he's not as talented or as pretty as the other Wemmicks (small wooden toys) in his town. Good ones are awarded little star stickers, and bad ones are given dots. Punchinello had lots of dots. However, Eli, the craftsman who made him, told Punchinello that he was special, "because I made you, and I don't make mistakes". This is a wonderful children's story meant to teach children about God. "People look on the outward appearance, but God looks on the heart." (I Samuel 16:7).

Do you see Punchinello's "dots"? They are denoted with metallic red enamel pom-poms on his shoes, and one at the top of his hat, and four matching red metallic buttons are on his vest. Pull Punchinello's dangling chain, and the arms and legs raise up & down, just as a clown would dance. This is a rare and delightful fur clip that I wanted to share with you. Only Marcel Boucher would create such a whimsical piece for a fur clip!