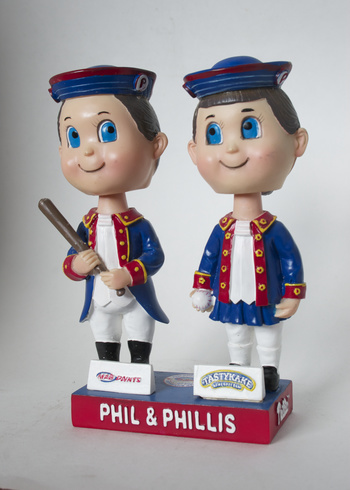 This Philadelphia Phil and Phillis Bobbleheads SGA occurred in 2003, the final year of Philadelphia's Veterans' Stadium.

Phil and Phillis were live mascots for the Phillies during the USA's Bicentennial years (c. 1976). There were also Phil and Phillis animated mechanisms featured on an innovative, for the era, exploding scoreboard, coming to life whenever a Phillie hit a home run!

Retired after the Bicentennial era, Phil and Phillis were replaced by the Phillie Phanatic, who remains the team's mascot to this day.

Baseball Bobbleheads and Nodders
See all