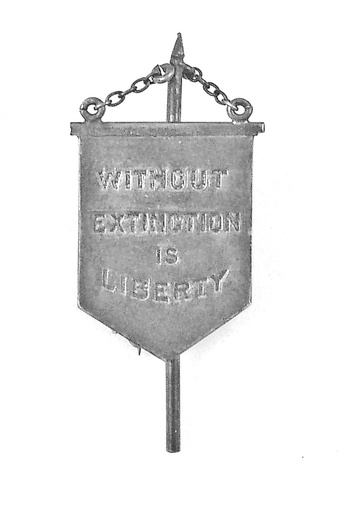 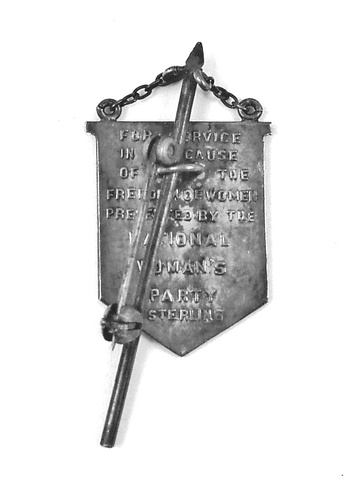 Such a small silver pin for such a powerful movement! A sterling silver pin shaped like the banners carried by members of the National Woman’s Party (NWP) who picketed the White House starting in January 1917 until August 1920, when the 19th Amendment was ratified. Measurements, including the staff: 1 1/2" long x 1/2" wide. Engraved on the front, "Without Extinction is Liberty." The reverse is engraved, "For service in the cause of the freedom of women Presented by the National Woman’s Party." About 150 to 200 pins were given to the women who were the “Silent Sentinels” picketing the White House in 1917. Only five of the pins are known to exist today.

The phrase "Without Extinction is Liberty" is drawn from a Walt Whitman poem, "By Blue Ontario’s Shore". (In addition, these were the last words spoken by Inez Mulholland, a well-known suffragist, who, despite being extremely ill, carried on with her suffrage activities and died as a result.)

"Without extinction is Liberty, without retrograde is Equality,
They live in the feelings of young men and the best women,
(Not for nothing have the indomitable heads of the earth been
always ready to fall for Liberty.)"

A long description of the Silent Sentinels and the final decision to give women the vote is below.

From a variety of sources including the American Museum of National History and Wikipedia: <http://americanhistory.si.edu/collections/search/object/nmah_1066180>

In January 1917, discouraged by President Wilson’s continued opposition to the suffrage amendment, Alice Paul, the leader of the National Woman’s Party (NWP) posted pickets at the White House gates—the first people to ever picket the White House. These “silent sentinels” stayed on duty in all weather and in the face of threats, taunts, and physical violence. Using their banners and their quiet courage they asked, "Mr. President How Long Must Women Wait for their Liberty?" and "Mr. President What Will you do for Woman Suffrage?"

Hoping to provoke a response, the language on the banners became more inflammatory. They used the president’s own words against him and pointed out the hypocrisy of his leading the country into the First World War to defend freedom while denying it to the women of his own country. Crowds who believed the pickets’ activities were disloyal in a time of war attacked the suffragists and destroyed their banners.

In July the police began arresting the pickets for "obstruction of traffic." When they refused to pay fines they were imprisoned in the Occoquan Workhouse. After three days of degrading treatment, President Wilson pardoned the women. At first they refused to be pardoned because they were innocent and had nothing to be pardoned for, but they were eventually forced out of the prison. After a heated debate, the House of Representatives created a committee to deal with women's suffrage in September 1917. Massachusetts Representative Joseph Walsh opposed the creation of the committee, thinking the House was yielding to "the nagging of iron-jawed angels." He referred to the Silent Sentinels as "bewildered, deluded creatures with short skirts and short hair.

The pickets continued despite the risk and more arrests were made, with longer jail sentences. Alice Paul was arrested on October 20, 1917, while she carried a banner that quoted Wilson: "The time has come to conquer or submit, for us there can be but one choice. We have made it." She was sentenced to seven months in prison. After 2 weeks of solitary confinement, Paul went on a hunger strike and the other women joined her. In response to the hunger strike the prison doctors force fed the women by putting tubes down their throats.

On the night of November 14, 1917, known as the "Night of Terror", the superintendent of the Occoquan Workhouse, W.H. Whittaker, ordered the nearly forty guards to brutalize the suffragists. They beat Lucy Burns, chained her hands to the cell bars above her head, then left her there for the night. They threw Dora Lewis into a dark cell and smashed her head against an iron bed, which knocked her out. Her cellmate, Alice Cosu, who believed Lewis to be dead, suffered a heart attack. Guards grabbed, dragged, beat, choked, pinched, and kicked other women.

Newspapers carried stories about how the protesters were being treated, public sentiment was aroused and on November 27 and 28, all the protesters were released, including Alice Paul after spending five weeks in prison. Later, in March 1918, the D.C. Circuit Court of Appeals declared all the suffrage arrests, trials, and punishments to have been unconstitutional.

On January 9, 1918, Wilson announced his support of the women's suffrage amendment (he was more influenced by Carrie Chapman Catt of the National American Woman Suffrage Society (NAWSA) than by the more militant Paul) . The next day, the House of Representatives narrowly passed the amendment but the Senate refused to even debate it until October. When the Senate voted on the amendment in October, it failed by two votes. And in spite of the ruling by the D.C. Circuit Court of Appeals, arrests of White House protesters resumed on August 6, 1918.

On another front, the National Woman's Party, led by Paul, urged citizens to vote against anti-suffrage senators up for election in the fall of 1918. After the 1918 election, most members of Congress were pro-suffrage. On May 21, 1919, the House of Representatives passed the 19th Amendment, and two weeks later on June 4, the Senate finally followed. With their work done in Congress, the protesters turned their attention to getting 36 states to ratify the amendment.

It was ratified on August 18, 1920, upon its ratification by Tennessee, the thirty-sixth state to do so by the single vote of a legislator (Harry T. Burn) who had opposed the amendment but changed his position after his mother sent him a telegram saying "Dear Son, Hurrah! and vote for suffrage. Don't forget to be a good boy and help Mrs. Catt put the 'rat' in ratification." With Burn’s vote, the 19th Amendment was ratified. Certification by U.S. Secretary of State Bainbridge Colby (1869-1950) followed on August 26, 1920.

On November 2 of that same year, more than 8 million women across the U.S. voted in elections for the first time. It took over 60 years for the remaining 12 states to ratify the 19th Amendment. Mississippi was the last to do so, on March 22, 1984.