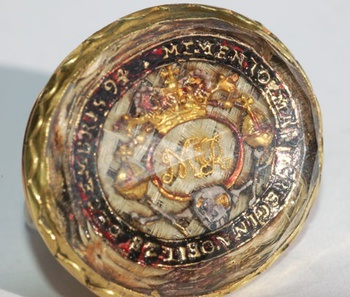 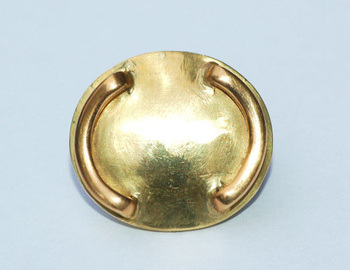 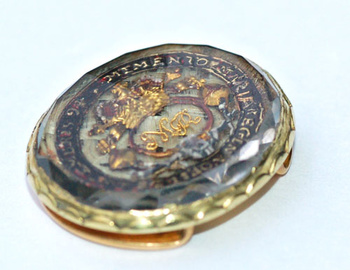 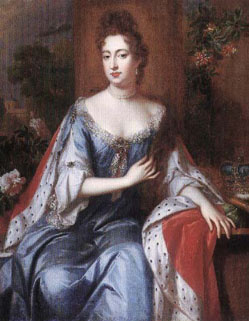 A 'Stuart Crystal' slide to commemorate the death of Queen Mary II, joint sovereign of Britain from 1668 - 1694.

Mary, the daughter of James II, was the wife of William of Orange, her first cousin. The marriage had been arranged for diplomatic reasons by Charles II yet produced no heirs. In December 1694 Mary succumbed to smallpox and died at the age of 32, on December 28th. Her husband was prostrate with grief and the nation underwent a period of long and deep mourning for the Queen. Four mournful trumpeters played a slow march leading her elaborate funeral procession to Westminster Abbey. After his death, the King was found to have kept a lock of Mary's hair and her wedding ring next to his heart.

This commemorative slide for Mary is gold, set with a compartment of woven hair overlaid with devices of the royal crown and sceptre, two orbs and an enamelled skull and crossbones. The central gold cipher letters MR represent Mary Regina and around the edge of the slide in red and gold enamelled letters is the motto : Memento Maria Regina Obit 28 December 1694.

The slide is covered with a densely faceted rock crystal. It measures one inch by 3/4 of an inch and is in superb condition, with coloured enamels as bright as they would have been when the slide was made in 1695.