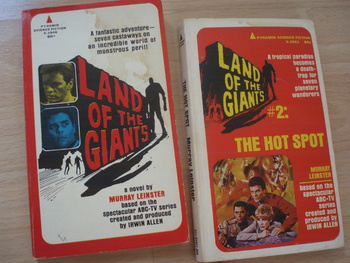 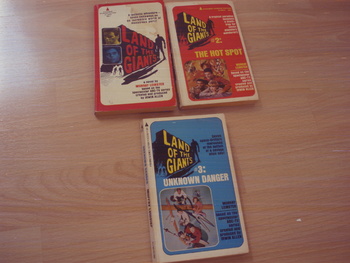 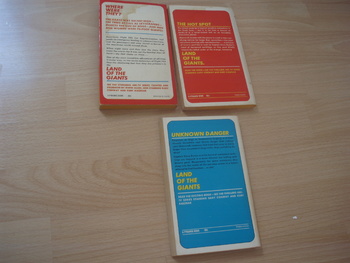 Land of the Giants is an hour-long American science fiction television program lasting two seasons beginning on September 22, 1968, and ending on March 22nd, 1970. The show was created and produced by Irwin Allen. Land of the Giants was the fourth of Allen's science fiction TV series. The show was aired on ABC and released by 20th Century Fox Television. The series was filmed entirely in color and ran for 51 episodes. The show starred Gary Conway and special guest star Kurt Kasznar.

Five novels based on the television series, including three written by acclaimed science fiction author Murray Leinster, were published in 1968 and 1969.

Pictured here are the first 3 Pyramid novels from 1968-69 which were written by famed author Murray Leinster.

Set fifteen years in the future, in the year 1983, the series tells the tale of the crew and passengers of a sub-orbital transport ship named Spindrift. In the pilot episode, the Spindrift is en route from Los Angeles to London, on an ultra fast sub-orbital flight. Just beyond Earth's boundary with space, the Spindrift encounters a magnetic space storm, and is dragged through a spacewarp to a mysterious planet where everything is twelve times larger than on Earth, whose inhabitants the Earthlings nickname "the Giants." The Spindrift crash-lands, and the damage renders it inoperable. ( Wikipedia )

NEW SEALED The Foundation Trilogy b...
$35

The Foundation Trilogy by Isaac Asi...
$35
See all