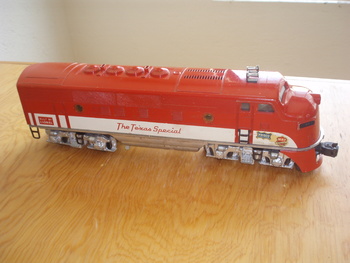 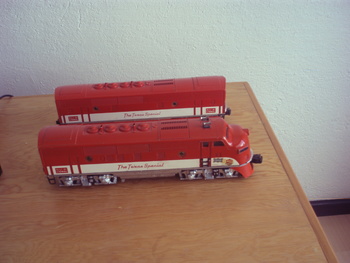 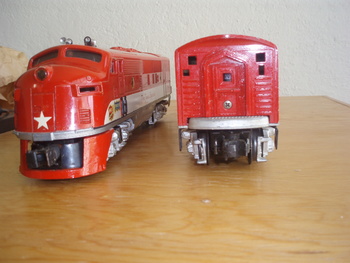 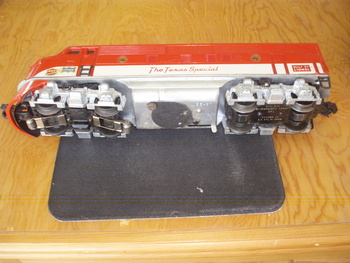 Good afternoon everyone,
In my previous post on Lionel O gauge trains The Santa Fe Train was presented. The O27 Lionel A and B units pictured above came out in 1954 a couple of years after the dual horizontal Santa Fe O gauge units were introduced in the early 1950's. The Texas Special was introduced as a O27 single horizontal unit Lionel's first single motor O27 diesel. It still had plenty of pulling power. Just a note: The difference between O and O27 gauge is in the height of the rails on the track O gauge is built a little higher for clearance. Sometimes people will run O gauge trains on O27 track which causes damage to parts like the fuel tank under the engine.
Here is a little history on The Texas Special found on the internet.

History
The 2245 Texas Special F3 AB unit of the mid 1950s is another set of quality F3 diesels produced by Lionel. This unit is notable in that it was the first Lionel F3 A unit to be produced with a single motor. Lionel catalogued the Texas Special F3 as an 027 gauge item and headed up two sets in 1954 and one in 1955.

The 2245 was always sold as an AB combination. Even with a single motor and Magnetraction, it is a powerful locomotive. The 2245 is unusual in that it was produced for only two years but there are three distinct variations over the two year production cycle.

Features
Standard features of the powered A unit include: red and white painted areas over a gray shell, single motor, Magnetraction, functional horn, three-position E-unit, operating front coupler with a non-operating rear coupler, illuminated headlight and number boards, plus dual ornamental horns, metal steps on the trucks, rear metal ladder steps mounted on the frame and an MKT and Frisco decal on each side below the cab windows.

Standard features of the non-powered B unit include: red and white painted areas over a gray shell, front and rear non-operating couplers, plus metal ladder steps at each corner. Note that the B units was available with either open portholes with clear lens inserts (1954) or molded closed portholes (1955).

Additional Detail, Photos & Box Information
When coupled together as an AB unit, the length of these F3s is approximately 26" long (coupler to coupler).

A Unit: produced with a single horizontal motor.
B Unit: included clear porthole lens inserts in the shell to match the A unit.
Early 1955 Texas Special

A Unit: produced with a single vertical motor.
B Unit: the lens inserts were eliminated and all portholes were molded closed as part of the shell.
Late 1955 Texas Special

A & B Unit shells: exact same as early 1955 production (see above for details).
Frames: changed to silver frames with black trucks, which was the same frame used on another all new Lionel locomotive in 1955, the 2243 Santa Fe F-3 AB diesel.
This is the hardest of the three variations to locate, however it has not generated a lot of collector interest as the earlier production variations are more colorful and prototypical.

The unit in the photos is the 1954 edition. The diesels from the 1950's are my favorite as my first Lionel was The Santa Fe a present from my uncle.