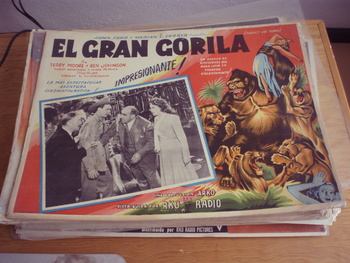 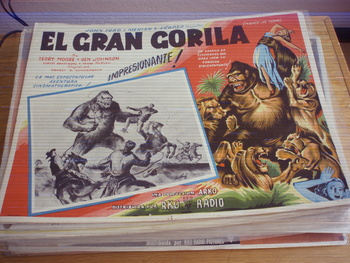 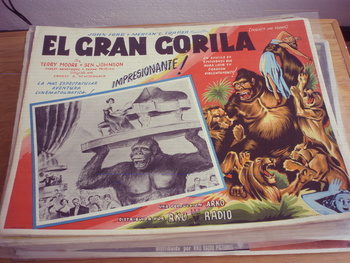 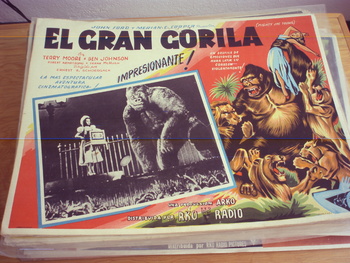 Good afternoon everyone,
I have always admired older movie Lobby cards just never got around to buying any until this week when I came across a huge pile of them in a Mexican second hand book store. The price was right so I picked through them and bought some American classic movies. The lobby cards are in Spanish but the illustrations are eye catching and I believe will look nice framed.
Pictured above are 4 different lobby cards from the 1949 movie Mighty Joe Young that would have been displayed in Mexican theaters to promote the movie with some small pinholes.

Mighty Joe Young (a.k.a. Mr. Joseph Young of Africa and The Great Joe Young) is a 1949 American black-and-white fantasy film from RKO Radio Pictures made by the same creative team responsible for King Kong (1933). Produced by Merian C. Cooper, who wrote the story, and Ruth Rose who wrote the screenplay, the film was directed by Ernest B. Schoedsack and stars Robert Armstrong (who appears in both films), Terry Moore, and Ben Johnson in his first credited screen role.

Mighty Joe Young tells the story of a young woman, Jill Young,( Terry Moore ) living on her father's ranch in Africa, who has raised the title character, a giant gorilla, from an infant and years later brings him to Hollywood seeking her fortune so she can save the family homestead.