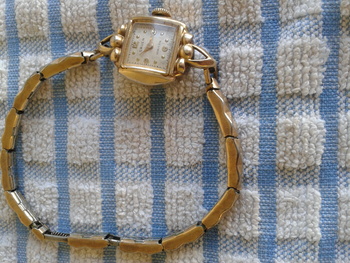 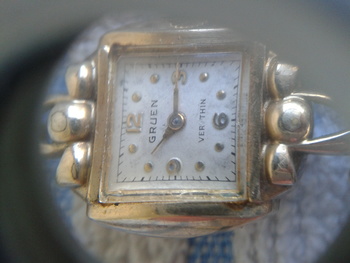 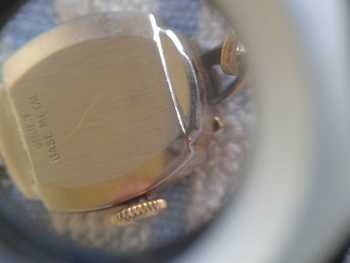 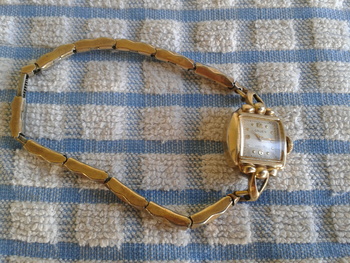 Good morning everyone,
Pictured above is a Ladies Gruen Veri - Thin wrist watch which is still in running condition. I opened the watch and decided against removing the timepiece which is inserted in the base metal back. I don't want to damage it as my eyes aren't as good as they once were. From what I have read on veri-thin simililar watches to the one pictured above is that is possibly 15 jewels and may be gold filled. The fine design of these ladies wrist watches seem to hold a desirable fashionable style even today.

History: From one of many Gruen watch company web pages

1938 The Veri-Thin wrist watches " gloriously styled and so practical are introduced as watch sales have dropped from over 5 million sold watches to around 800,000 sold due to the impact of the great depression. Gruen survived the great depression and continued to produce good quality wristwatches some other watch making companies were not as fortunate and closed shop. The veri-thin followed the success of the curvex introduced in 1935 both watches share similar parts and looks and veri-thins are sometimes mistaken or represented as a curvex as the curvex usually has more value then the veri-thin.

Continuing the success of their VeriThin pocket watches, Gruen also launched a series of Veri-Thin wristwatches. Contemporary Curvex and Veri-Thin movements often are closely related, and can share many parts. By the 1940s, most Gruen wristwatches were either Veri-Thin or Curvex models, although a few cheaper models with older movements were still produced.

Like the Curvex, the Veri-Thin was developed to honestly fill fashionable watch case shapes, and was an alternative to using a smaller, less-durable and less-reliable movement. Veri-Thin calibres are shaped to be thicker in the middle and thinner around the outside edges. Their dials are curved or domed, and the movement bulges up into the dial shape. The shape of movement, dial and case is designed to present a very thin edge when viewed at an angle, and to disguise the fact that the watch is thicker in the center. These styling tricks are very effective—many of these models look impressively thin and flat when worn. As styles changed, later models often had boxy, flat sides, and did not have the thin, flat look of the early models.